This Is The Woman The Clinton Campaign Wants Voters To Know 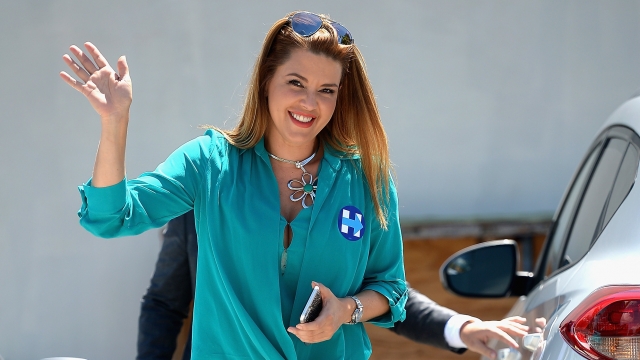 "He called this woman 'Miss Piggy.' Then he called her 'Miss Housekeeping' because she was Latina. Donald, she has a name," Hillary Clinton said during the first presidential debate.

Her name is Alicia Machado, and she could be a major asset to the Clinton campaign — or so the campaign hopes.

"He'd yell at me all the time. He'd tell me, 'You look ugly,' or, 'You look fat,'" Machado said, according to a translation in the video.

And the campaign got what it likely wanted — Machado became the topic of discussion the morning after the debate.

"She was the worst we ever had ... she gained a massive amount of weight and it was a real problem. We had a real problem. Not only that, her attitude," Trump told "Fox & Friends" on Tuesday morning.

Trump's comments were likely welcomed by the Clinton camp, since they prolonged the media focus on Machado.

Machado ended up doing a press call with reporters later Tuesday. And by Tuesday afternoon, her name was all over the headlines.

The Clinton campaign's use of Machado's story shouldn't come as much of a surprise. The campaign has tried to call into question Trump's fitness to be president by airing ads featuring controversial comments he has previously made.

And it recently started airing an ad featuring young girls looking into mirrors.

"I'd look her right in that fat, ugly face of hers," Trump says as a young girl looks in a mirror.

The ad asks, "Is this the president we want for our daughters?"

Trump mentioned the Clinton ads during the debate Monday night, calling them "untrue" and "misrepresentations."

"It's not nice. And I don't deserve that," Trump told debate moderator Lester Holt.