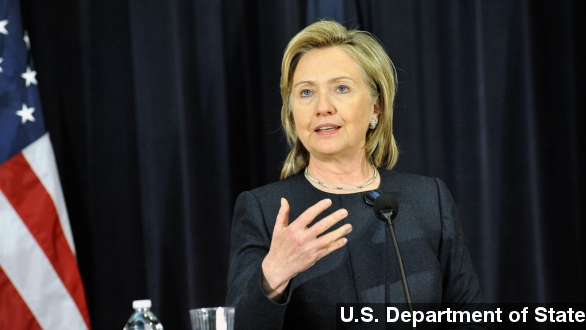 SMS
Clinton Book Tour: More Than Handshakes And Friendly Crowds
By Ben Levin
By Ben Levin
June 14, 2014
The former Secretary of State and First Lady has caught flack for a pair of rocky interviews, though her book has received mostly positive reviews.
SHOW TRANSCRIPT

A book tour or a campaign event? With Hilary Clinton, it can be a little hard to tell. (Via U.S. Department of State)

In bookstores from New York to Los Angeles, Clinton is meeting fans and members of the press as she sells her new book "Hard Choices" to a public eager for a look inside the mind of the likely 2016 presidential contender. (via MSNBC)

The book has already hit #3 on Amazon's bestseller list, behind "The Fault in our Stars" and a popular diet book.

But some in the media say the tour has gotten off to a rocky start. A contentious interview with Terry Gross of NPR questioned the motives behind Clinton's evolving stance toward gay marriage.

​Clinton has also been criticized for saying that her speaking fees — as high as $200,000 a speech — were so costly because she exited the White House "broke" and "struggled to ... piece together the resources for mortgages," a comment she later backtracked from on ABC.

ROBIN ROBERTS: "Can you understand the reaction though when you say struggling? Clinton: ​"Well, yes I can."

Still, reviews for "Hard Choices" have been mostly positive. The New York Times characterized it as "a subtle, finely calibrated work that provides a portrait of the former secretary of state and former first lady as a heavy-duty policy wonk."

The tour has also had its lighter moments. Visiting a Costco, Clinton was surprised by Supreme Court Justice Sonia Sotomayor. (via MSNBC)

Sotomayor said she was just there to shop. Supreme Court Justices: They're people to. (via Politico)