Clinton And Sanders Split Wins In Mississippi And Michigan 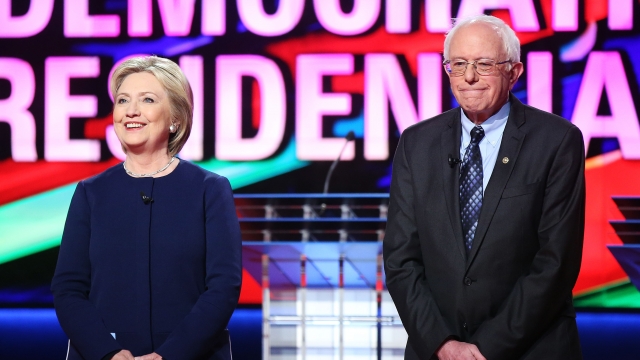 SMS
Clinton And Sanders Split Wins In Mississippi And Michigan
By Eugene Daniels
By Eugene Daniels
March 8, 2016
Sanders' win in Michigan was a big surprise, especially since Clinton had the backing of many of Michigan's top Democrats.
SHOW TRANSCRIPT

Former Secretary of State Hillary Clinton and Sen. Bernie Sanders both added to the win column in Mississippi and Michigan on Tuesday, respectively.

Clinton's Mississippi win is definitely not a surprise; Clinton went into the primary with a polling average lead of more than 40 points in the state. Her so-called "firewall" of support from minority voters has made it hard for Sanders to gain any real traction in Southern states.

Michigan is a bit of a different story. The Sanders campaign hedged its bets on the state, hoping the candidate's message on income inequality and trade agreements would resonate in the state. In a speech last week, Sanders said, "If the people of Michigan want to make a decision about which candidate stood with workers against corporate America and against these disastrous trade agreements, that candidate is Bernie Sanders."

And Clinton had endorsements from the top Democrats in the state, including the backing of the mayor of Flint. Both Clinton and Sanders have publicly criticized the water crisis and the government's handling of it.

March 15 will be the next big voting day in the primaries, with states like California and Ohio up for grabs.

This video includes images from Getty Images and clips from Hillary for America, CNN and Bernie 2016.