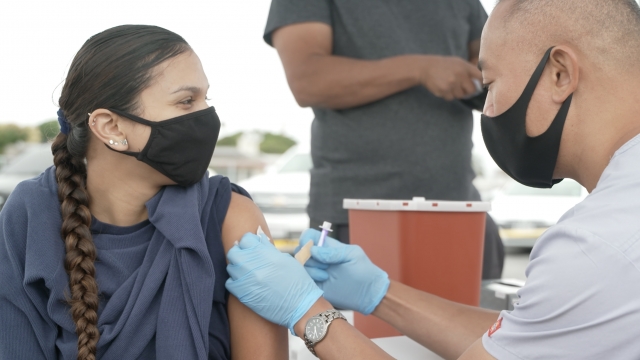 Right now, children 11 and younger can’t get a COVID-19 vaccine. Meaning the pressure is on to make sure as many of their older classmates as possible get their shots and vaccine cards.

"It wasn't really necessarily me waiting, but more is me wanting to get to know more about what the vaccine is and more trusting it. And clearly, you know, I end up trusting it enough to take it," 15-year-old Sanaa Harrison told Newsy. "Knowing that I'll be around like my grandparents and stuff. I want to make sure that I'm safe around them."

In Hayward, California, planning the logistics of back-to-school vaccine clinics like this one by the school district and community nonprofit La Familia began last summer. The mobile clinic is here for a day in the parking lot and will return 3 weeks later, days before high schools start the fall semester.

"It's familiar. This is where you have a lot of first, right? You would have your prom. You would come to your first basketball game. And so what a great way to have your first vaccine to combat this this crazy virus,"  Antonio Isais, Community Outreach and Health Coordinator for La Familia said.

"What is the biggest challenge right now, getting that 12- to 17-year-old age group vaccinated in this community?" Lindsey Theis with Newsy asked.

"I think it's hard when parents aren't vaccinated or maybe you're hesitant and I, and I  think sometimes students rightfully so, take cues from their families," he said.

That was the case for Saul Ontiveros and his 17-year-old daughter Jewel. Saul lost his brother to the virus, but still was unsure. Jewel didn’t trust the vaccine either, at first.

"I kind of just don't want to get it. I was just nervous about the side effects, and you know, what could happen,"  Jewel Ontiveros said.

"What had kind of stopped you up until this point from wanting to get the vaccine? What was holding you back?"

"I just didn't want to. I wasn't pushing myself to come in, I want. I was thinking in my mind, I need to get it," Saul Ontiveros said.

"I was thinking about returning when I wasn't so psyched to go to begin with, you know, to be surrounded by people all over again. If he gets it with me, I'll get it," Jewel said.

This happens often, Community Outreach and Health Coordinator Antonio Isais says. In five hours, they administered 82 shots. But before that, it takes hours of phone calls and one-on-one conversations. Just to get people like Jewel and Saul to this point.