Out Of Time: Climate Talks Go Past Deadline 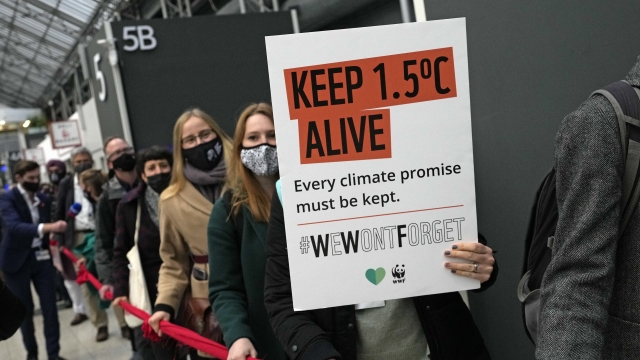 SMS
Out Of Time: Climate Talks Go Past Deadline
By Associated Press
By Associated Press
November 12, 2021
Friday's draft proposals called on countries to accelerate "the phaseout of unabated coal power and of inefficient subsidies for fossil fuels."

Going into overtime Friday night, negotiators at U.N. climate talks in Glasgow were still trying to find common ground on phasing out coal, when nations need to update their emission-cutting pledges and, especially, on money.

Talks are at a "bit of a stalemate," and the United States, with support from the European Union, is holding back talks, said Lee White, the Gabonese minister for forests and climate change.

Mohamed Adow of Climate Action Network International, a long-time talks observer, said poorer nations are beyond disappointed with the way the United Kingdom presidency has come up with drafts and that this has become "a rich world" negotiation. He said poorer nations cannot accept what has been proposed.

U.S. Climate Envoy John Kerry on Friday night told The Associated Press that climate talks are "working away" after a late night meeting with his Chinese counterpart and before a hallway chat with India's negotiator.

No agreement was ready by the 6 p.m. local time scheduled end of the conference. And sometimes that helps diplomats get in a more deal-making mood.

"The negotiating culture is not to make the hard compromises until the meeting goes into extra innings, as we now have done," said long-time climate talks observer Alden Meyer of the European think tank E3G. "But the U.K. presidency is still going to have to make a lot of people somewhat unhappy to get the comprehensive agreement we need out of Glasgow."

Friday morning's draft proposals from the meeting's chair called on countries to accelerate "the phaseout of unabated coal power and of inefficient subsidies for fossil fuels."

A previous draft Wednesday had been stronger, calling on countries to "accelerate the phasing out of coal and subsidies for fossil fuel."

Kerry said Washington backed the current wording. "We're not talking about eliminating" coal, he told fellow climate diplomats. But, he said: "Those subsidies have to go."

Kerry said it was "a definition of insanity" that trillions were being spent to subsidize fossil fuels worldwide. "We're allowing to feed the very problem we're here to try to cure. It doesn't make sense."

But there was a mixed response from activists and observers on how significant the addition of the words "unabated" and "inefficient" was.

Richie Merzian, a former Australian climate negotiator who directs the climate and energy program at the Australia Institute think tank, said the additional caveats were "enough that you can run a coal train through it."

Countries like Australia and India, the world's third-biggest emitter, have resisted calls to phase out coal any time soon.

Swedish climate activist Greta Thunberg told The Associated Press she feared that "as long as our main goal is to find loopholes and find excuses, not to take real action, then we will most likely not see any big results in this meeting."

Thunberg, who attended the start of the talks in Glasgow, spoke at her weekly protest outside Sweden's parliament in Stockholm Friday morning.

Scientists agree it is necessary to end the use of fossil fuels as soon as possible to meet the 2015 Paris accord's ambitious goal of capping global warming at 1.5 degrees Celsius (2.7 Fahrenheit). But explicitly including such a call in the overarching declaration is politically sensitive, including for countries, such as Saudi Arabia, that fear oil and gas may be targeted next.

Another crunch issue is the question of financial aid for poor countries to cope with climate change. Rich nations failed to provide them with $100 billion annually by 2020, as agreed, causing considerable anger among developing countries going into the talks.

The latest draft reflects those concerns, expressing "deep regret" that the $100 billion goal hasn't been met and urging rich countries to scale up their funding for poor nations to reduce emissions and adapt to climate change — an issue with which developed countries are also grappling.

"Don't call them donor countries. They're polluters. They owe this money," said Saleemul Huq, a climate science and policy expert who is director of the International Centre for Climate Change and Development in Bangladesh.

The draft also proposes creating a fund to help poor countries tap existing sources of aid when they face the devastating impacts of climate change. But rich nations such as the United States, which have historically been the biggest source of human-caused greenhouse gas emissions, are opposed to any legal obligation to compensate poor countries.

Another issue from Friday morning's draft concerns when nations have to come back with new emission-cutting targets which they were supposed to submit before the Glasgow talks. Because the pledges weren't enough, the draft calls on the nations to submit another tougher target by the end of 2022, but some nations, such as Saudi Arabia, are balking about this said World Resources Institute's David Waskow.

In 2015 in Paris, there was a debate about whether targets should be updated every five or 10 years so going to one year after Glasgow is a big deal, said Environmental Defense Fund Vice President Kelley Kizzier, a former EU negotiator.

Negotiators from almost 200 nations gathered in Glasgow on Oct. 31 amid dire warnings from leaders, activists and scientists that not enough is being done to curb global warming.

According to the proposed decision, countries plan to express "alarm and utmost concern" that human activities have already caused around 1.1C (2F) of global warming "and that impacts are already being felt in every region."

While the Paris accord calls for limiting temperature to "well below" 2C (3.6F), ideally no more than 1.5C, by the end of the century compared to pre-industrial times, the draft agreement notes that the lower threshold "would significantly reduce the risks and impacts of climate change" and resolves to aim for that target.

In doing so, it calls for the world to cut carbon dioxide emission by 45% in 2030 compared with 2010 levels, and to add no additional CO2 to the atmosphere by mid-century. So far the world is not on track for that.

U.N. Secretary-General Antonio Guterres told The Associated Press this week that the 1.5C-goal "is still in reach but on life support."

The annual meetings, first held in 1995 and only skipped once last year due to the pandemic, are designed to get all countries to gradually ratchet up their efforts to curb global warming.

But for many vulnerable nations the process has been far too slow.

"We need to deliver and take action now," said Seve Paeniu, the finance minister of the Pacific island nation of Tuvalu. "It's a matter of life and survival for many of us."