How Climate Change Is Affecting Life In The Florida Keys 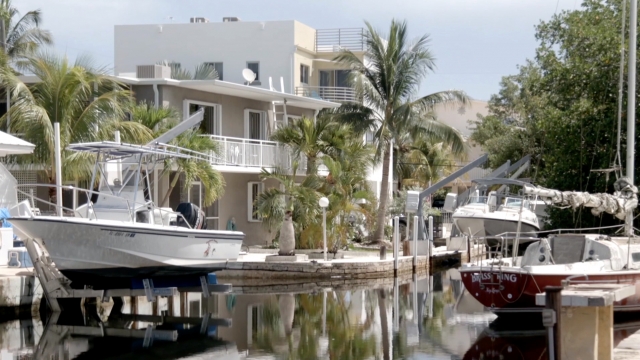 SMS
How Climate Change Is Affecting Life In The Florida Keys
By Bianca Facchinei
By Bianca Facchinei
November 5, 2021
The national gap between the rich and the poor is already growing. But that the disparity may be worse in the Keys because of climate change.

It's the southernmost point of the continental U.S., rich with history and year-round sun: the Florida Keys. A world-renowned destination that is also home to over 74,000 people.

Some residents, like Emilie Stewart, say the Keys as we know them could be forever altered because of climate change.

"I've been here full-time since 1998, part-time since 1995," Stewart said. "I always wonder, 'Will the water ever get high enough to knock homes off their foundation?'"

The extreme weather events are getting worse and rebuilding is more expensive.

"I spent all the money to fortify the house against storms," Stewart said.

The national gap between the rich and the poor is already growing. But the disparity may be worse in the Keys because of climate change.

"They might not be able to afford it anymore," she said. "We need local people here. We need policemen here and our teachers here."

When roads wash out in storms, lower-income workers are typically most impacted. Remote work isn't usually an option for them. But there are other concerns, like affordable housing.

"I don't see an end in sight for the affordability issue here," Haag said.

David Kelly is a professor of economics at the University of Miami Herbert Business School.

He says: "There is a flight to higher elevation areas and the prices of the real estate in the high elevation areas gets bid up. And then the poor and low-income, and middle-income to some degree as well, have very limited options."

What happens in the Keys could be a harbinger of what's to come for the rest of coastal America and nearby regions.

"You could say, 'Hey, we're going to rethink the Keys and convert it into a place where there's condos and a lot of perhaps vacation type of rentals and less people actually living there,'" Kelly said. "That's not the Keys, though, right? People go there because it has this island feel to it. So, it'd change the nature of what it is."