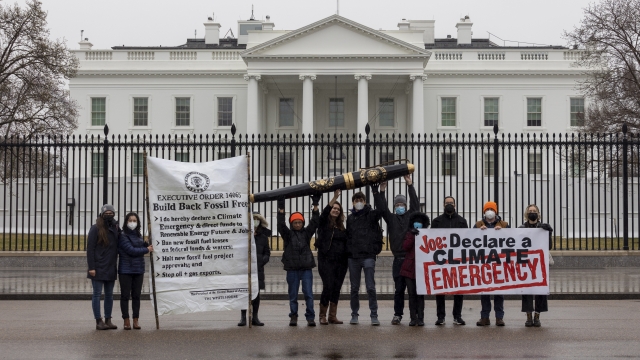 While the effects of the climate crisis — like melting ice caps, rising sea levels and more wildfires — are accelerating, President Joe Biden's plans to tackle it are stalled.

"There is no more urgent crisis facing this nation or the world than the threat posed by climate change," he said in a campaign video. "We can deal with this problem; we just have to act."

But as president, his proposals aimed at breaking America's fossil fuel habit ground to a halt. More than $500 billion in spending in the "Build Back Better" bill was opposed by Senate Republicans and Democrat Joe Manchin.

"I guess I'd like him to say we are going to deal with the climate crisis as the crisis that it is; it's an emergency," said Susan Joy Hassol, director of climate communication.

Climate advocates like Hassol want to see President Biden bring his proposals back to life, including putting a tax on carbon emissions.

President Biden's address to Congress comes days after the release of a new United Nations report that paints a dire picture of a world approaching a point of no return.

"With fact upon fact, this report reveals how people and the planet are getting clobbered by climate change," U.N. Secretary-General António Guterres said. "Nearly half of humanity is living in the danger zone now. "

Climate legislation opponents often cite the price tag, but scientists and advocates warn the alternative could be much worse.

"People always talk about the cost, but they don't talk about what it will cost if we don't take these actions," Hassol said.

Climate advocates know there are other national priorities — like the pandemic and the war in eastern Europe — but those, they say, will pass. Climate change, however, is not going anywhere.