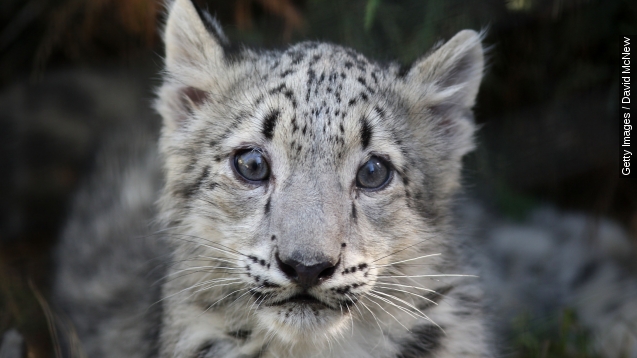 SMS
Climate Change Threatens Snow Leopards Even More Than Humans
By Evan Thomas
By Evan Thomas
October 24, 2015
If the warming climate isn't checked, it could yank critical living and hunting territory out from under the planet's few remaining snow leopards.
SHOW TRANSCRIPT

Climate change affects all of us — from us 7.28 billion humans to the few thousand snow leopards remaining in the wild. (Video via Snow Leopard Trust)

A new report from the World Wildlife Fund details how a warming climate could soon eliminate more than a third of the already shrinking snow leopard habitat and push the species toward extinction. (Video via Wildlife Conservation Society)

The WWF estimates there are fewer than 6,400 snow leopards left in their native ranges in central Asia — and that number could be as low as 4,000.

And as the planet warms, they have less space to live and hunt in. Warmer temperatures raise the treeline and make critical prey animals harder for the cats to find. (Video via BBC)

What's more, the WWF worries warming might lead to humans and their settlements moving higher up the mountains as well. In the last two decades, human interaction has already reduced leopard populations by 20 percent. (Video via National Geographic)

In 2013, a coalition of Central and South Asian countries committed to securing and preserving 20 healthy snow leopard habitats by 2020.

It helps that we humans now have a better idea of how these cats live, even though they're still notoriously hard to spot.

We didn't even have footage until the 1970s when National Geographic published the first images of snow leopards in the wild. Tracking and camera tech have come a long way since then.

Now, we can put an action cam on a stick and find them home in their dens. (Video via Snow Leopard Trust)

The explosion in footage has helped awareness and conservation efforts — as have zoo programs. (Video via Brookfield Zoo)

The Snow Leopard Trust says there are about 600 cats in captivity where breeding programs help ensure the species keeps its genetic diversity, and companionship programs help orphaned and abandoned cubs get the development they need. (Videos via Wildlife Conservation Society, Smithsonian)

But more research and conservation is needed. The WWF's report says the measures in place now address only 14 percent of all known snow leopard habitats.

And it all comes back to climate. The WWF hopes highlighting the precarious existence of these cats will get countries to take action to prevent damaging climate changes. (Video via Snow Leopard Trust)

After all, as conservationists told CBS, preserving leopard habitats will also indirectly help millions of people who live nearby. (Video via Snow Leopard Trust)

"Helping snow leopards means you are helping humans. People share that landscape with those cats," said the executive director of the Snow Leopard Trust.

The WWF's full report is available on its website.

This video includes images from Getty Images and Laurascudder / CC BY SA 3.0.