Climate Change Will Likely Drive A Megadrought In The Western U.S. 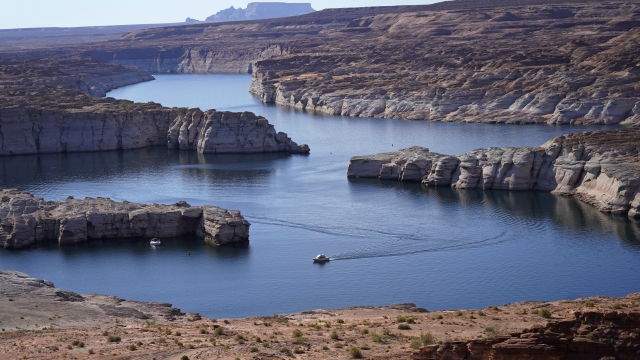 SMS
Climate Change Will Likely Drive A Megadrought In The Western U.S.
By Scott Withers
By Scott Withers
August 26, 2021
The geological location of the United States makes it ripe for reoccurring droughts.
SHOW TRANSCRIPT

The western United States is a landscape in transformation. The green pastures of the upper plains are turning brown. The lush forests of the Pacific Northwest are drying out and burning down. The majestic rivers and reservoirs have dropped to dangerously low levels.

A nearly two-decade long "megadrought" is redefining the region.

Droughts are a normal part of the environment. Paleoclimatic records show droughts have occurred for as long as rain has fallen on the planet’s surface.

The geological location of the United States on the planet, makes it ripe for reoccurring droughts.

The Dust Bowl of the 1930's decimated the agricultural industry in America's "bread basket," but there were many droughts before it. And, there have been many droughts since then. Droughts in the 1950's and early 2000's led to what scientists have long warned about, a persistent never-ending drought in America's west.

Droughts are naturally occurring, but human-driven climate change has made the problem worse.

"If emissions continue, then there is a very good chance that we're going to see a level of drought and aridity that we haven't seen in at least a thousand years," said Associate Professor of Geosciences Jessica Tierny, University of Arizona.

NASA's climate change research suggests, the drought may stretch through the end of the century due to human-produced greenhouse gas emissions.

As the Earth's average temperature increases, the water cycle speeds-up. The higher temperature causes more water to evaporate from the soil and plants. When this occurs in the West, the water vapor in the atmosphere is transported eastward and falls as rain over this part of the country. This movement of moisture creates a tale of two countries. The west is bone dry, while the east overflows with water.

A scientific feedback loop makes the situation worse. The dry soil and lack of plants generates less evaporation and sends less moisture into the air. This crease less rainfall in the region, which dries the soil further and kills-off even more plants.