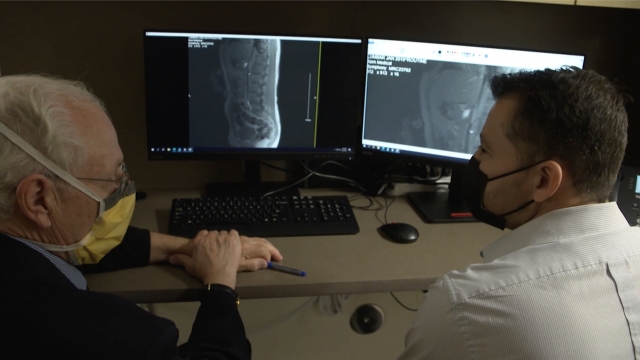 SMS
Climate Change Could Drive Potentially Deadly Valley Fever Cases
By Lindsey Theis
By Lindsey Theis
May 11, 2022
Coccidioides can cause a flu-like infection, but if it spreads to the brain or spine, patients could be in pain for years.

A potentially deadly fungus grows in the parched southwest soil.

Coccidioides is crucial in a desert ecosystem. It breaks down decaying material to dirt.

When inhaled, however, the spaghetti-like structures set up shop in the lungs. They can grow unnoticed, leading to an infection called coccidioidomycosis, or cocci for short. Doctors also call it valley fever.

"If you look at it worldwide, it's a fairly rare disease," said Dr. Royce Johnson, infectious disease chief at Kern Medical. "Look at the western U.S., it's fairly common."

At the Valley Fever Institute in Bakersfield, California, Dr. Johnson has dedicated his career to the research and care of cocci patients.

Doctors think 40 to 60% of humans get cocci, but because of the symptoms and relative obscurity, only about 10% of the infected are diagnosed.

"It's a flu-like illness, body ache, fever, sweats, cough, chest pain, shortness of breath, plus or minus a rash on your legs," Dr. Johnson said.

Most patients recover well, but coccidioides can grow anywhere it wants, sometimes leaving the lungs and going to a patient's brain or backbone.

Paul Hernandez has lived with valley fever for nearly a decade.

Before cocci, he says he was a gym rat — running races, swimming with his kids, having parties with family.

His first symptoms were a small rash and "headaches more painful than migraines."

In his case, the cocci spread into his spine.

"I was expecting to just get, you know, get back on to the world and just be normal again, but that wasn't the case," Paul Hernandez said.

"Something that would work for him for a few months or for a year, and then all of a sudden he was doing okay, and then he'd start from zero," said Dolores Hernandez, Paul's wife.

"Hit me pretty hard to know that he's gone through all this, and there's not much we can do, you know?" said Paul Hernandez Jr., Paul's son.

Paul Hernandez says the worst of it came from a treatment crucial to keeping him alive.

"It's a port that is placed on top of your brain," Paul Hernandez said. "The actual treatment consists of getting an injection through that port."

Paul Hernandez said he was getting these injections three times a week for a few years. He said there were a few times he was afraid he wasn't going to make it through.

"The drugs we have just slow it down," Dr. Johnson said. "We count on the patient's immune system to get over this disease, and that's why the treatment courses are lengthy and sometimes lifelong."

Doctors say those most at-risk are people who may have more frequent contact where the soil is kicked up, like forestry fire fighters, construction workers or someone who gets stuck in a dust storm.

Valley fever cases have risen in California, Arizona, Nevada, Utah and New Mexico since 2014 according to CDC numbers. In California, cases are up 800% since 2000.

Researchers don't have an exact answer yet as to why, but climate change is the likely culprit.

"As the western half of the United States gets warmer and remains dry, the fungus could start moving further and further north," Gorris said. "We might start seeing cases in Oregon and more in Washington state, especially kind of spreading out around that area where we already know cocci lives."

It could spread north into Colorado as the state becomes hotter and drier.

"We are following a more severe climate change scenario, and that showed that valley fever may reach the U.S. Canadian border by year 2100," Gorris said.

Scientists have been working on a cocci vaccine since the 1960s, mostly with no luck, but they are getting closer. Researchers in Arizona have successfully studied and formulated and are preparing to license a valley fever shot for dogs. After that, human trials will begin.

Back in Bakersfield, Paul Hernandez still struggles to walk. He was recently bedridden for two months, but now he's in a clinical trial for a new drug. His spine punctures are down to one a year.

At home, there's little swimming or running 5k races, but family time will always be there.