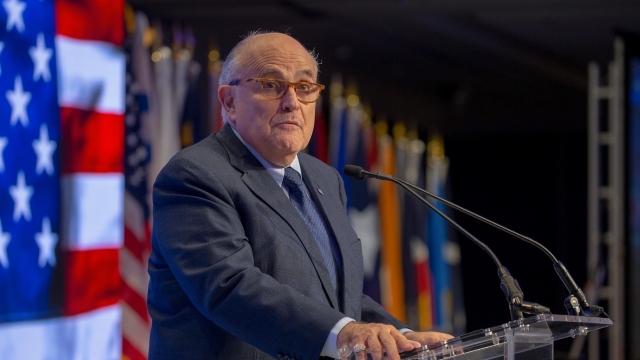 The two men had previously helped connect Giuliani with Ukrainian officials during his investigation into Democratic presidential candidate Joe Biden. Giuliani has referred to the men as "clients" but the indictment does not mention the former New York mayor or say that he was connected to the alleged conspiracy.

Giuliani reportedly called the timing of the unsealed indictment on Thursday "suspicious."

Federal prosecutors charged Parnas and Fruman with masking a $325,000 donation. That move prompted a campaign finance watchdog group to file a complaint with the Federal Election Commission.

The duo had reportedly been under investigation by the U.S. attorney's office in Manhattan and were considered possible flight risks. The Wall Street Journal reports the men had dined with Giuliani sometime before they were arrested at Washington's Dulles airport. Two other men were also indicted in connection with the conspiracy.

In the last year, Parnas and Fruman had become major Republican donors, and federal prosecutors say they've been involved in schemes designed to advance their interests and those of a Ukrainian official. On Thursday, Geoffrey Berman of the Southern District of New York said the men had attempted to "gain political influence while avoiding disclosure of who was actually making the donations and where the money was coming from."

President Trump has been photographed with the men, but he and his campaign have denied knowing them. When asked about the situation before departing for a campaign rally in Minneapolis, the president said he has pictures "with everybody."