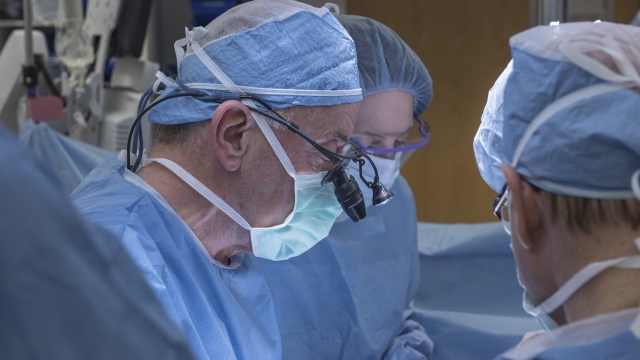 SMS
Cleveland Surgeons Perform The US's First Uterus Transplant
By Melissa Prax
By Melissa Prax
February 26, 2016
The first uterus transplant in the U.S. was performed on a 26-year-old woman at the Cleveland Clinic Wednesday.
SHOW TRANSCRIPT

After nine hours of surgery, the first uterus transplant in the U.S. was a success.

The Cleveland Clinic performed the surgery on a 26-year-old who had volunteered for a clinical trial when potential candidates were screened at the end of last year. The uterus was from a deceased organ donor.

A successful transplant like this one could help the nearly five percent of women around the world who have Uterine Factor Infertility, or a misshapen uterus.

For other women who have birth defects or are born without a uterus, undergoing this type of surgery could the be their only option for physically carrying a child.

That was the case for a woman in 2014 who was the first to give birth to a child after a uterus transplant in Sweden.

However, the body easily rejects the womb, so typically after the woman carries a child, the uterus does need to be removed.

The Cleveland Clinic is still screening more uterus transplant candidates and will likely do another surgery like this in the future.

This video includes clips from the Cleveland Clinic, The Birthing Channel and BBC.