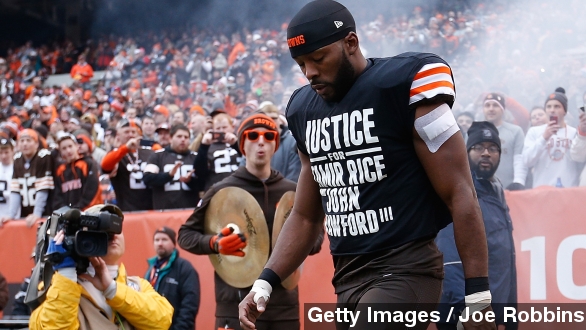 But it was a different shirt, worn by another Cleveland athlete, that has some of the city's police upset.

Prior to Sunday's game against the Cincinnati Bengals, Cleveland Browns' wide receiver Andrew Hawkins walked onto the field with a shirt that read, "Justice for Tamir Rice and John Crawford" on the front and "The Real Battle of Ohio" on the back — an apparent gesture protesting their deaths.

12-year-old Tamir Rice was shot and killed by a rookie police officer after wielding what turned out to be a BB gun. 22-year-old John Crawford III was fatally gunned down by cops after carrying a toy gun at an Ohio Wal-Mart. Both Rice and Crawford were black. (Video via Cleveland Police Department, Beavercreek Police Department)

"It's pretty pathetic when athletes think they know the law. They should stick to what they know best on the field. The Cleveland Police protect and serve the Browns stadium and the Browns organization owes us an apology."

The Cleveland Browns responded to the note saying, "We have great respect for the Cleveland Police Department and the work that they do to protect and serve our city. We also respect our players' rights to project their support and bring awareness to issues that are important to them if done so in a responsible manner."

Hawkins' stand on social issues comes weeks after five St. Louis Rams made headlines by making the "hands up, don't shoot" pose, protesting the death of 18-year-old Michael Brown. And the exchange between the police union and team management was almost the same in both cases.

Hawkins also isn't the only Cleveland Browns player to protest the deaths of black men at the hands of white police officers recently.

Browns' safety Johnson Bademosi wore what looked like a homemade version of the "I Can't Breathe" shirt Dec. 7 before a game against the Colts. But neither he nor the Browns received nearly as much push back from the police union as Hawkins' shirt provoked.

And while Hawkins hasn't commented on his political statement, Bademosi told Sports Illustrated why he chose to to make a stand on social issues.

"The NFL drives this standard. They tell us to wear pink for these games and camouflage for these games. While I embrace those causes, there are other things that are just as important to me as an individual."