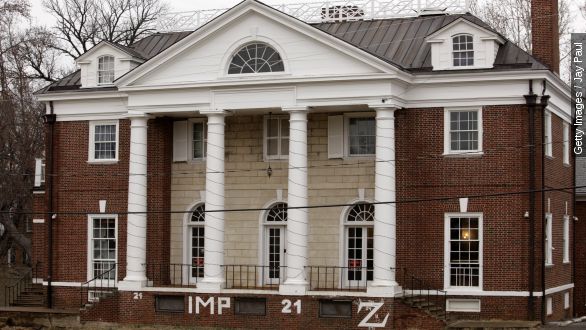 Rolling Stone magazine has spent the last four months being pilloried for its story about a brutal gang rape at a University of Virginia frat house. The backlash culminated Sunday with a report from the Columbia School of Journalism detailing Rolling Stone's failures in reporting the story and an apology from the story's author.

The Columbia report says, "The failure encompassed reporting, editing, editorial supervision and fact-checking. The magazine set aside or rationalized as unnecessary essential practices of reporting that, if pursued, would likely have led the magazine's editors to reconsider publishing Jackie's narrative so prominently, if at all."

The Rolling Stone story, titled "A Rape on Campus," recounted a vicious assault against a UVA student dubbed Jackie and her difficulties in getting the school to investigate the attack.

After the article was published, the UVA fraternity was suspended and police opened an investigation into the alleged sexual assault. (Video via WUSA)

But in the following weeks, other outlets, like The Washington Post, found inconsistencies and errors that undermined key parts of the story.

Post writer T. Rees Shapiro told MSNBC, "Certain details that were reported so far appear to be inconsistent, such as the date of September 28, 2012. The fraternity has said there was no party that night."

Rolling Stone later admitted that the story's author, Sabrina Rubin Erdely, had agreed to Jackie's request not to contact any of the men supposedly involved in the attack. Jackie said she feared retaliation. (Video via PBS Newshour)

Journalists have since torn that decision apart, saying Erdely didn't do enough to verify the story and Rolling Stone's editors shouldn't have agreed not to contact the men.

In a statement released Sunday, Erdely agreed with the critics, saying, "Reading the Columbia account of the mistakes and misjudgments in my reporting was a brutal and humbling experience. I want to offer my deepest apologies. ... These are mistakes I will not make again."

But Erdely will continue to write for Rolling Stone. In fact, the magazine says it won't punish any of its staff members involved in the story, saying there was no evidence they were deliberately deceptive.

The full report can be found on the Rolling Stone and Columbia Journalism Review websites. A press conference discussing the findings is scheduled for Monday.