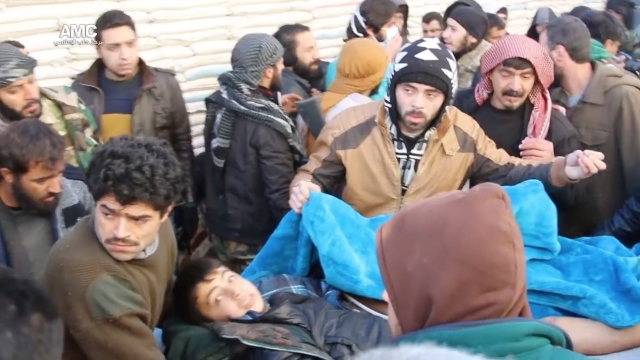 SMS
New Deal Means Civilians Can Start Evacuating Aleppo – Again
By Carter Woodiel
By Carter Woodiel
December 18, 2016
Buses are reportedly on their way to move thousands of people from the eastern part of the city. Many people were out in the cold for two nights.
SHOW TRANSCRIPT

The evacuation of civilians in Aleppo, Syria, is back on — for now.

Syrian state media says buses were on their way Sunday to the eastern part of the city to pick up civilians trapped there for the past two days, as fighting continues between supporters of Syrian President Bashar al-Assad and rebel groups.

Evacuation from the war-torn city originally started Thursday. Up to 9,000 civilians made their way out. But disagreement between the two sides stopped the evacuation soon after it started.

In the two days of negotiations that followed, many civilians were left out in the cold overnight in bombed-out buildings throughout the city.

The evacuation restarted after rebel groups agreed to give passage to backers of Assad from the rebel-held western part of Aleppo.

Forces backing Assad took control of eastern Aleppo over the past week, continuing fighting that's gone on in the city since 2012.

SEE MORE: Video Of Children In Aleppo Causes Turkish Presenters To Break Down

The stop-and-go nature of evacuations is typical of the situation in Syria as a whole — cease-fires have recently tended to crumble after just days or weeks.