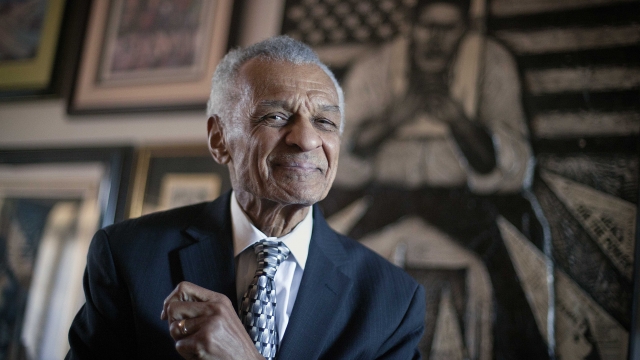 He began staging sit-ins against segregation in Peoria, Illinois, in the 1940s. He met King soon after the 1955 Montgomery bus boycott, and helped organize the Freedom Rides that forced federal desegregation of transit lines in the South.

King made Vivian his national director of affiliates at the Southern Christian Leadership Conference and sent him to Selma in 1965. While registering Black voters there, Vivian challenged a segregationist sheriff, Jim Clark, saying, "You can turn your back now and you can keep your club in your hand, but you cannot beat down justice."

Clark punched Vivian. News coverage of the assault helped turned the local registration drive into a national event. Thousands of protesters later marched across the Edmund Pettus Bridge, from Selma to Montgomery, and pressured Congress to pass the Voting Rights Act later that year.

In a statement on Friday, former Prescient Barack Obama called Vivian a "pioneer who shrunk the gap between reality and our constitutional ideals of equality and freedom." He added that Vivian "was always one of the first in the action — a Freedom Rider, a marcher in Selma, beaten, jailed, almost killed, absorbing blows in hopes that fewer of us would have to."

Vivian continued to serve in the SCLC after King’s assassination in 1968, and became its interim president in 2012. He was awarded the Presidential Medal of Freedom in 2013. He also co-founded VISION, the precursor to Outward Bound; the Center for Democratic Renewal; and a consulting firm that encouraged improvements in race relations.

During an interview in 2012, Vivian said: "Nonviolent, direct action makes us successful. We learned how to solve social problems without violence. We cannot allow the nation or the world to ever forget that."

Vivian is survived by four daughters: Jo Anna, Kira, Denise and Anita, as well as two sons: Mark and Albert.

Additional reporting by Desiree Seals and Michael Warren of The Associated Press.