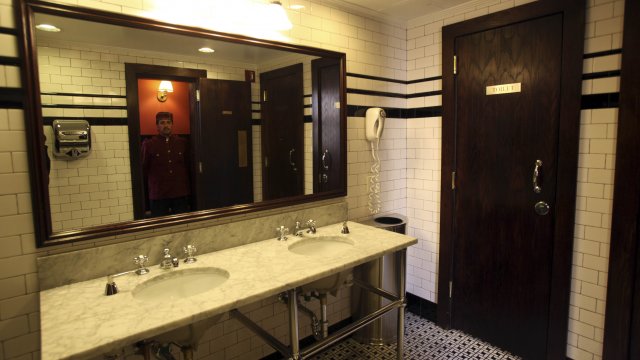 When nature calls, no one wants to be in the middle of Times Square.

"I had to go to Central Park to find a public toilet because I didn't find anything else," said Camilo Vargas, a tourist from Colombia. "Even in public restaurants, it was kind of difficult to find the toilets."

"I was in Times Square shopping with my sister, and I almost peed myself," said Teddy Siegel, founder of @Got2GoNYC on social media sites.

The city ranks 93rd in the U.S. for public bathrooms per capita, according to a survey by the nonprofit The Trust for Public Land.

But that could change soon. The city council is trying to take the first step in decades to build more public bathrooms.

"It's a plan to add at least one new public bathroom in every zip code of New York City," said Mark Levine, Manhattan borough president.

Efforts to tackle the lack of bathrooms come after massive shutdowns during the early days of the pandemic. All 76 toilets in the subway system were closed, and local businesses locked their restrooms, making it even harder for anyone to find a lavatory.

Looking at the bigger picture, there are 8.4 million people living in New York City, not even counting the 60 million who visit every year, with only 1,103 public bathrooms at their disposal.

"It's just really unacceptable that a basic human right and any bodily function is now a privilege," Siegel said. "It shouldn't be this way."

After finding herself in a dire situation in Times Square, Siegel decided to take matters into her own hands.

Siegel was turned away by several businesses and was finally allowed to use the restroom at a McDonald's — only after buying a bottle of water.

Inspired by her own experience, she created her TikTok account @got2gonyc.

She posts videos about accessible bathrooms in the city and shares a link with over 500 crowdsourced restroom addresses, even sending out codes to access retailer bathrooms.

"I just decided to make a Google Maps list so that there would be one place where everyone could go to find all of these accessible bathrooms," Siegel said.

"It's so much more than a public health crisis; it's also an equity crisis," Siegel said.

It's a crisis affecting the most vulnerable.

Juan de la Cruz, director of emergency relief at the Coalition for the Homeless, says the city needs permanent bathroom relief in sight for the almost 4,000 people living on the streets.

He says people face "quite a bit" of discrimination when they try to find a restroom.

"Some of the folks that we serve are, for lack of a better word, visibly homeless, and some folks do try not to allow them access to the restrooms," he said.

Levine, the council bill’s co-sponsor, says that the legislation has majority support. It's a program that could cost millions to the city.

"I don't think we should let the cost be the obstacle here," Levine said. "This can be done. This is a good investment, and at any way, any rate, it's an imperative. We need to find the resources in the well to do it."

In the meantime, Siegel uses her time to advocate for the bill. She says she’s hopeful for a better New York City.

"It ultimately is the city's responsibility to be providing bathrooms for its people, and they should be free and sanitary as well," Siegel said.

The bill could pass the city council by the end of September.