Citizens And Officials React To The Leak Of Uvalde Shooting Video 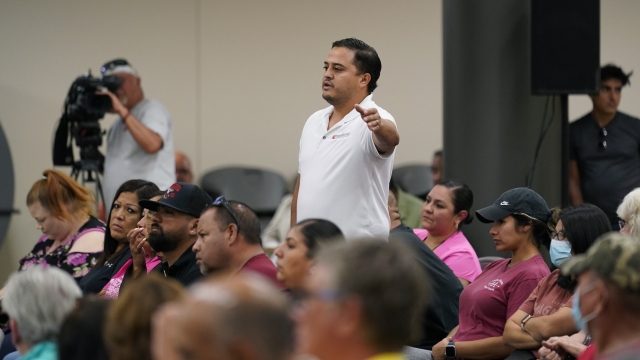 SMS
Citizens And Officials React To The Leak Of Uvalde Shooting Video
By Isbella Diaz
By Isbella Diaz
July 13, 2022
Many families and city officials are expressing outrage and anger with law enforcement and the media following leaked video from Robb Elementary.

"I want to go on record. The way that video was released today is one of the most chicken things I've ever seen," said Don McLaughlin, mayor of Uvalde.

Many are expressing anger, frustration and personal attacks on law enforcement and the media.

Ernest King is a city council member in Uvalde, Texas.

"Said to the press not to put this stuff out there, when they knew what we were getting ready to do with this particular video. The press chose to put that out there." King said.

But the community has also been calling for transparency.

All dominated Uvalde's city council meeting Tuesday. And city officials weren't the only ones in the uproar.

Uvalde residents were shocked after watching video posted by the Austin American-Statesman and KVUE showing armed officers waiting more than 77 minutes in a school hall before taking down the 18-year-old gunman.

All this just days before the families of the victims were set to see a version of the video, as well as the results of a preliminary report by a Texas House special committee.

The meeting was often rampant with exasperation, and at times a loss for words.

"When I looked at the video and I saw the officers who were standing in that hallway, doing nothing, except standing back. I was very very disappointed," one Uvalde resident said.

Residents also took the opportunity to pry answers out of officials about the removal of a memorial dedicated to the 21 lives lost in the school massacre.

Eloise Castro is a Uvalde resident.

"Why has everything been removed from the park? I'm talking about the crosses, flowers, candles, stuffed animals. And the Bible verses have been erased. Whose idea was that? It's as though nothing has happened," Castro said.

Some even went so far as to accuse the city of trying to hide the tragedy, and their alleged failures in plain sight.

"I passed by Robb this morning. And I did see those little crosses there. They were behind the dead flowers. How dare have Robb, have those dead flowers there. Do something. Do something! This is ridiculous! Again, you cannot believe the anger I have, and many of the citizens here in Uvalde. And they want to know, is this just another cover up," Castro said.

Emotions ran so high some had to step outside the meeting for fresh air.

Deli Martinez is a Uvalde resident.

NEWSY'S ADI GUAJARDO: How would you describe the actions of these officers?

DELI MARTINEZ: I would say I'm being disrespectful in saying they're cowards. But they didn't do nothing for the little kids. I don't know what other word.

The mayor says he's just as frustrated as the families and just as lost for answers.

"You know what their reports say? 'Do not write report.' 'See DPS' or 'See Texas Rangers'. That's what were turned in to us because they were told not to write reports," said McLaughlin.

And in the wake of the leak, anger and resentment toward Texas DPS is growing at all levels across the state.

One Texas state senator tweeted, in part: "Governor Abbott and Texas DPS keep letting Uvalde families down" and promised to the victims' families "we will not let up the pressure to expose the full truth or what happened and hold those responsible for the failed law enforcement response accountable."

As for Uvalde's mayor, he's already called for an investigation into the leak.

"This video came from Austin, Texas. Someone in the center of the DPS did it. And whoever did it, it's a pretty chicken action in my opinion. It was pretty low-life," McLaughlin said.

And he says, it'll be pretty easy to narrow down exactly where the leak came from.

"The FBI, the D.A., The DPS and the Texas Rangers. Those are the four agencies that had the video," he continued.

The leak is adding to the mistrust that already exists between local and state officials and an exasperated community still in mourning.

Felicia Martinez is the mother of a Robb Elementary School shooting victim.

"We're suffering. And I know the world is suffering too. But these were our babies, our babies that were taken from us. So to the person that leaked it, screw you, screw you, and that's coming from me, Felicia Martinez from all of us, screw you," Martinez said.