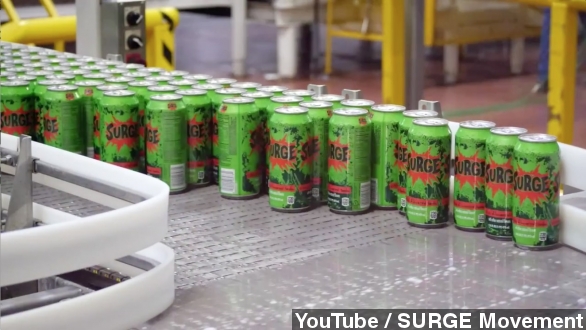 SMS
Citing Popular Demand, Coca-Cola Brings Back Surge
By Katherine Biek
By Katherine Biek
September 15, 2014
Fans of Surge, the discontinued lemon-lime soda from the Coca-Cola Co., inspired the company to bring back the drink and sell it on Amazon.
SHOW TRANSCRIPT

Seems like the Coca-Cola Co. has been listening to fans — because it's bringing back a '90s favorite.

Remember Surge? The company's version of Mountain Dew, the lemon-lime drink was taken off shelves in the early 2000s. (Video via Coca-Cola Co.)

But fans weren't happy when this happened, some even creating a Facebook page to try to persuade Coke to bring the drink back. The SURGE Movement — that's what the group of fans call themselves — even raised enough money to buy a billboard in hopes of capturing Coke's attention.

Which the company is now doing. Kind of.

It's selling 12-packs of the drink on Amazon. The drinks are currently sold out, though.

Consumerist pointed out the company is only bringing back the drink for a limited time.

There seems to be quite a following for the drink. Besides having the huge fan following on Facebook, Surge was also included in Business Insider's list of people's favorite snack food and drinks that have been discontinued.

In a press release, Coke called fans' efforts to bring the drink back "the best compliment any brand could hope for."

The company also said if this Surge comeback does well, Coca-Cola will consider bringing back some other products it's taken off the market. (Video via YouTube / Surge)

So what might those products be? How about OK Soda, the fruity-flavored drink that only lasted seven months on the market and came with some interesting advertising. (Video via Coca-Cola Co.)

And there's currently a MoveOn.org petition to bring back Tropical Sprite Remix.

A writer for USA Today pointed out that the future of Surge depends entirely on those willing to buy the drink: "Don't take this responsibility lightly. Second chances for sodas don't come around often. Just ask Crystal Pepsi."

Do you remember Crystal Pepsi? Neither do we.