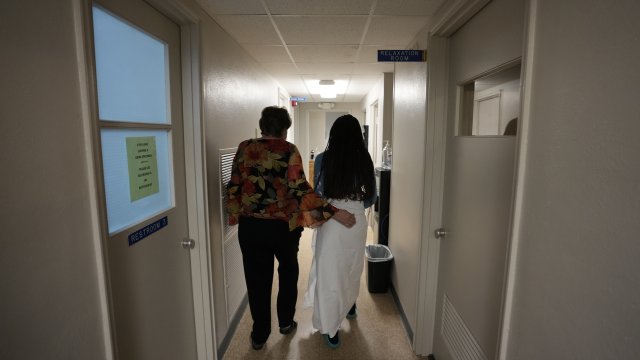 Efforts are underway at the Idaho-Oregon border to ensure safe travel for women seeking out-of-state abortions in a post-Roe v. Wade America.

The new frontier in the battle over abortion rights may play out in small state-line towns like Ontario, Oregon.

A new Planned Parenthood clinic is rumored to open there — a first for the conservative eastern Oregon town just across the river from Idaho. Two trigger laws there would criminalize abortion 30 days after the Supreme Court’s imminent ruling to overturn Roe v. Wade. But in Oregon, the right to an abortion is firmly protected, making Ontario and the future Planned Parenthood clinic the closest place to get a legal abortion in a post-Roe Idaho.

John Kirby, who owns Ontario's local hardware store and serves on the city council, is not happy about it.

"You know, that's what they do in western Oregon," Kirby said. "That's not what we in eastern Oregon want to portray. It's just a different lifestyle."

Kirby says Ontario — less than an hour drive from Boise — has already become Idaho's hub for recreational marijuana sales, which are legal in Oregon. Now with abortions coming to town, Kirby jokingly muses as to what's next.

"So if we could get prostitution, it would be a trifecta," Kirby said.

Oregon recently approved $15 million in new funding to help cover abortion costs for patients traveling from other states — a demand projected to more than double once the Idaho ban goes into effect.

The Guttmacher Institute, which supports abortion rights, estimates 26 states are certain or likely to ban abortion if the Supreme Court overturns Roe v. Wade in the coming months. The monumental shift would split the nation in half as Republican-led states impose abortion bans and Democratic ones like Washington and Oregon push to ease access for patients traveling from neighboring states.

As these legal boundaries for abortion are redrawn in the U.S., abortion providers are rethinking their approach to care.

At a Seattle Planned Parenthood clinic, Erin Berry, a physician and medical director for Planned Parenthood Washington, has back-to-back appointments. She says in the past month, she's seen multiple patients travel from Texas and Oklahoma where abortion is now banned. Once Idaho, and likely Montana, join that list, Berry expects the number of out of state clients to surge.

"A few months ago we had safe, legal abortion in all 50 states, and that's going to go away," Berry said. "We are going to live in America where access is a huge patchwork."

As Washington braces for a projected four-fold increase in patients from Idaho seeking abortions, Berry says Planned Parenthood is pouring resources and staff into call centers and patient navigators to help them coordinate travel and find services. She says abortion will never go away, but there's only so much they can do.

"Because the law will tie our hands to be able to provide appropriate medical care, and that, that's chilling," Berry said.

The 60-foot-tall Table Rock cross overlooking Boise is a reminder of a longstanding separation-of-church-and-state debate in Idaho — a debate Blaine Conzatti with the Idaho Family Policy Center says has finally been won.

"We're blessed in this state to have legislators who have a gut reaction to the horror of abortion violence and want to do something about it," Conzatti said.

From the small church next to an Albertson's parking lot, Conzatti penned one of Idaho's most restrictive abortion laws. Now on appeal, the law was modeled after last year's six-week ban in Texas that allows civil suits against doctors who perform abortions.

Conzatti says these restrictions in Idaho are just the beginning.

"So we believe that abortion is homicide and that the abortionist who commits the crime is essentially acting as an assassin for hire — a hit man," Conzatti said. "And so we would like to see abortion treated the same in Idaho code as any other type of murder."

Conzatti is also pushing to outlaw emergency contraceptives and IUDs, but he admits his hands are tied when it comes to preventing Idaho residents from seeking abortions in neighboring states.

"Yeah, unfortunately, Idaho doesn't have jurisdiction outside of its borders," Conzatti said.

Conzatti says there are ways to go through legislation to prevent women from going across state lines to receive an abortion but that he isn't looking at that "option" right now.

In Oregon, Kirby says as the U.S. becomes more and more polarized around these issues, some of the state lines that define them may no longer make sense in a post Roe v. Wade America.

"You know, there's a movement in Oregon to separate multiple counties away and become part of what's termed as greater Idaho," Kirby said. "They've got their challenges, but this is the type of thing that portrays that flavor. And because the rest of Oregon is so far away from us, you know, that's not our lifestyle. We're Idaho."

Kirby says ultimately, it's Ontario's reputation that's at stake. But a new, younger member on the city council, Eddie Melendrez, questions whose reputation Kirby is speaking of.

"It kind of rubs me a little wrong because I'm thinking, like, what in what Ontario are they talking about?" Melendrez said.

Melendrez, a former agricultural worker who now helps at-risk youth, says Ontario is the poorest city in Oregon, with early a third of the town's population falling below the federal poverty level, and he says city leaders continually reject measures that would help. That's why he chose to speak out in a recent city council meeting about the new Planned Parenthood clinic. But the real litmus test, he says, was his 9-year-old daughter.

"She looked at me and she goes, 'And what did you say, papi? What did you say?'" Melendrez said. "And I said, 'Well, I said that women should have the right to choose what they want with their body.' And then she's like, 'Oh, that's good.'"

Melendrez says he's dedicated his life to helping youth who lack resources and support, and he says that's what this community should be focused on: the kids that are here now.

From the floodwaters of New Orleans to the Amazon River - reporter and filmmaker Sam Eaton has covered the environment and climate change for national news outlets for twenty plus years, earning three Society of Environmental Journalists Awards for Outstanding Beat Reporting and Outstanding Investigative Reporting along the way. Sam has worked for Marketplace, PBS Newshour, PRI’s The World and has taught climate change coverage to countless middle and high school students via the Pulitzer Center for Investigative Reporting.