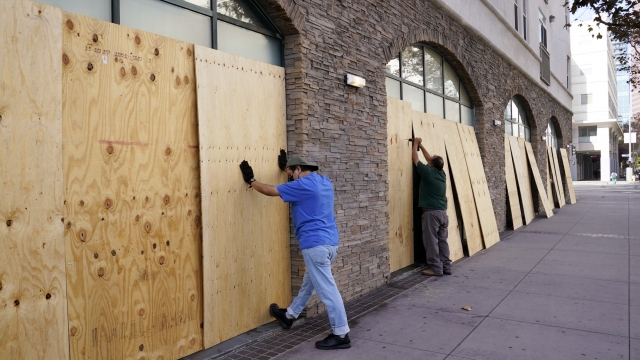 SMS
Cities, Businesses Prepare For Possible Election Day Unrest, Violence
By Shira Tarlo
By Shira Tarlo
November 2, 2020
Cities and retailers across the U.S. are boarding up in preparation for potential unrest after Tuesday's election, regardless of who wins.
SHOW TRANSCRIPT

Across the country, retailers and businesses are boarding up, preparing for possible unrest — and even violence —  around Election Day.

"The fear is that depending on how it works out that there will be protests," said Holly Brooks, who owns Capitol Hill Books in Denver.

In Portland, Oregon, and Chicago, police departments have canceled November days off for officers in charge of responding to protests.

"The city has been in close communication with our business community," Chicago Mayor Lori Lightfoot, a Democratic, said at a recent press conference.

The nation's capital is also on high alert.

The White House is not taking any chances, erecting a "non-scalable fence" around the complex. It's the same kind of fencing that was put up this summer during protests over George Floyd's death and police brutality.

"One of the things that they're reflecting on are the failures in the wake of the death of George Floyd that has subsequently plagued the city with a series of looting and violence and anarchy," explained former NYPD lieutenant Darrin Porcher. "We don't want a repeat performance of that."

"We're done. We're tired of the tweets, the anger, the hate, the failure, the irresponsibility," former Vice President Joe Biden said Sunday at a rally in Pennsylvania.

Several demonstrations are scheduled to take place outside the White House on Election Day, with the D.C. police department already announcing street closures. But many hope for peace.

"Despite a huge spike of protests, despite months of attempts to scare people, and despite weeks of early voting, we have had a remarkably peaceful election season up until now," said Rachel Kleinfeld, a senior fellow at the Carnegie Endowment for International Peace. "We have had a vast number, millions and millions of people voting without a great deal of trouble and we need to hope that that happens tomorrow."