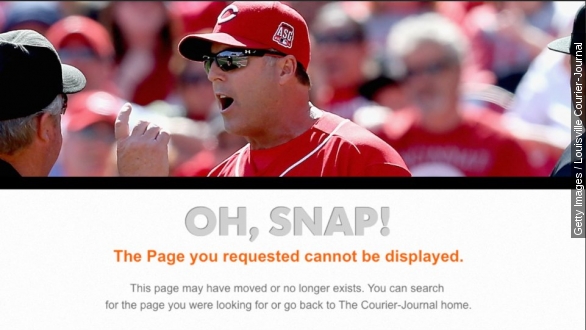 Cincinnati had a weird Monday night, and it all started with Reds manager Bryan Price.

Prior to ending a four-game losing streak against Milwaukee on Monday night, Price was asked by Reds beat reporters why All-Star catcher Devin Mesoraco wasn't available to pinch-hit throughout the series. This sent Price into a tirade more than five minutes long and involving the F-word 77 times.

WCPO sports anchor John Popovich called it uncharacteristic of the manager, but the Cincinnati strangeness didn't stop there.

This Cincinnati Enquirer story originally went up saying audio of the dressing-down would be posted at a later time. It wasn't. A transcript of it is all that appears.

However, sister newspaper the The Courier-Journal in Louisville did post the audio — briefly.

As Deadspin writes, about 20 to 30 minutes after The Courier-Journal posted the audio on its site and promoted it via Twitter, the audio was yanked and tweets from the newspaper were deleted.

Which left a lot of people wondering why one outlet never posted it and another removed it after just a few minutes.

Still, this is the Internet, and nothing goes away forever. Deadspin, USA Today and other outlets have posted the audio on their sites.

Now, managers, players and reporters generally play nice with one another most of the time. But this is actually the second time Enquirer reporter Rosecrans has been the subject of an obscenity-laced rant in the past few years.

In 2013, Reds second baseman Brandon Phillips went off on the reporter as then-manager Dusty Baker stood by.

"I'm tired of you talking that negative s--- about the team, dog," Phillips said.

Going into Monday's game, the Reds had lost seven of their last eight games. That stretch also included Price's first game ejection this season as Reds manager April 19, so it's easy to see why Price might have been on edge.

Major League Baseball has not commented on whether the Reds manager will be fined for the outburst, but for Price's sake, if one does come down, let's hope it's not per expletive.

CORRECTION: A previous version of this video identified Price as a first year manager. This is Price's second year as the Reds manager. The video has been updated.