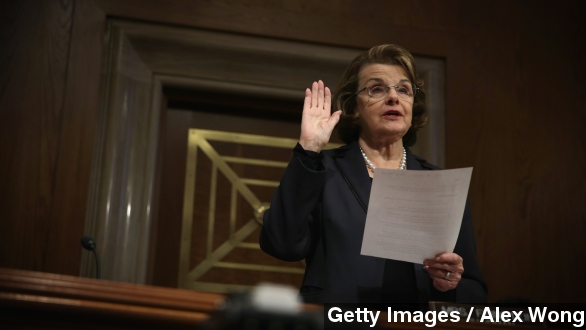 SMS
CIA Defenders Attack Senate Torture Report Ahead Of Release
By Matt Picht
By Matt Picht
December 8, 2014
The CIA's defenders are speaking out against the Senate Intelligence Committee's report on enhanced interrogation, expected to be released Tuesday.
SHOW TRANSCRIPT

"We tortured some folks. We did some things that were contrary to our values," President Obama said.

That candid admission from President Obama came from a question back in August about the Senate's comprehensive, unreleased report on the post-9/11 interrogation practices used by the CIA.

Now, Senate Intelligence Committee chair Dianne Feinstein is preparing to release a summarized version of the report — and it's already drawing political flak from the agency's defenders.

Feinstein is expected to release a 480-page summary of the over-6,000-page report Tuesday. The Senate's conclusions are expected to be very critical of the CIA's so-called "enhanced interrogation techniques." It supposedly details inhumane practices the agency engaged in; accuses the agency of repeatedly covering up the extent of these practices to the public, Congress and the White House; and claims the program failed to gather any useful information.

The Senate committee's conclusions have been strongly contested by many lawmakers, including Republicans on the Senate committee who didn't support the investigation. The report's release has triggered a wave of criticism from the CIA's defenders, ranging from factual disputes,

"To say that we relentlessly, over an expanded period of time lied to everybody about a program that wasn't doing any good, beggars the imagination," former CIA director Michael Hayden told CBS.

To character witnesses like former president George W. Bush, who told CNN, "These are patriots. And whatever the report says, if it diminishes their contributions to our country, it is way off base."

To predictions the report will threaten American lives overseas.

Rep. Mike Rogers, who chairs the House Intelligence Committee, told ABC, "This will, in fact, incite violence. And it's likely to cost someone their life."

That last concern is shared by the administration as well, despite their general support for the document's release. Secretary of State John Kerry reportedly asked Feinstein to delay the report briefly in order to give American interests across the world time to prepare for a potentially violent reaction.

But Feinstein is adamant releasing the report is the right thing to do, despite the criticism. She recently told the Los Angeles Times the CIA interrogations undermined "societal and constitutional values that we are very proud of. ... Anybody who reads this is going to never let this happen again."

Feinstein's also releasing the report during the end of her tenure as head of the Senate Intelligence Committee. Come January, the chair will belong to Republican Senator Richard Burr thanks to the incoming GOP majority.