Chuck Hagel Stepping Down 'Under Pressure' 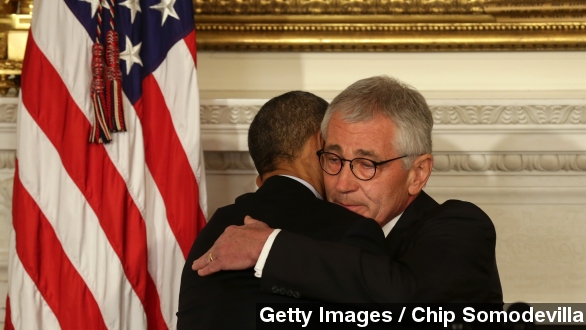 From the tone of this announcement, you’d think we were watching a routine resignation.

“Chuck Hagel has been no ordinary Secretary of Defense," President Obama said Monday morning. "Over nearly two years, Chuck has been an exemplary Defense Secretary. … When it’s mattered most, behind closed doors in the Oval Office, you’ve always given it to me straight.”

But multiple reports are framing it as anything but the completely voluntary departure of a beloved cabinet member.

"Under pressure" is the headline from The New York Times, which first reported the news of Defense Secretary Chuck Hagel’s departure.

"Chuck represents the bipartisan tradition that we need more of in Washington," President Obama said of Hagel when he announced his nomination in January of last year.

On Twitter, multiple reporters described Hagel’s facial expression as “sad” during the announcement of his resignation.

Hagel was the only Republican on Obama’s national security team. At his nomination announcement last year, the president had praised Hagel as one who speaks his mind.

"ISIL is as sophisticated and well-funded as any group that we have seen. They're beyond just a terrorist group," Hagel said at a news conference in August.

But that particular assessment of ISIS back in August from Hagel came at a time critics say the administration had been downplaying the threat the terrorist group posed.

"I think it's fair to say their extreme ideology poses a medium and long-term threat," President Obama told CBS' Norah O'Donnell in June.

And that's partly why — at least according to reporting from the Times — Hagel is on his way out.

That — and — according to Wall Street Journal sources — Hagel had disagreed with other administration officials about the White House strategy in Ukraine and Syria.

You might recall his tense confirmation hearing last year when he faced criticism from his former Republican colleagues for his opposition to the surge in Iraq.

"The question is, were you right or wrong?" Sen. John McCain (R-Ariz.) had asked.

Hagel is himself a veteran. He served in Vietnam and is the recipient of two Purple Hearts.

He’ll stay in his post until the confirmation of a successor, widely speculated to be former Under Secretary of Defense for Policy Michele Flournoy, former Deputy Secretary of Defense Ashton Carter or Rhode Island Democrat Senator Jack Reed — a Ranger and former paratrooper.

This video includes an image from the U.S. Marine Corps.