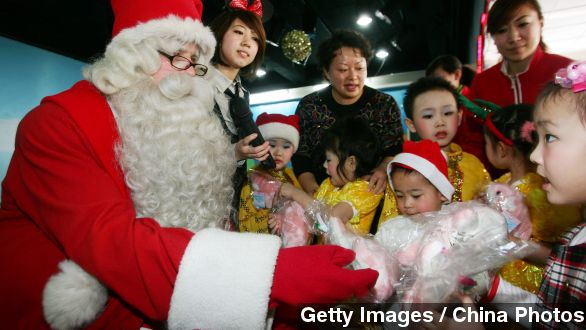 Christmas in many parts of China looks like a lot like Christmas elsewhere in the world. There's the religious celebration — and the commercial one.

But it's becoming more and more complicated to celebrate the holiday in China. This year brought tidings of great controversy at a university in Xi'an in the country's northwest.

A state-run outlet reported the school had banned Christmas celebrations, and international outlets took note. State media called it an attempt to "Resist the expansion of western culture."

Another state-run paper, The Global Times, reported officials in Wenzhou in east China banned any Christmas-related events in schools, hoping citizens would "pay more attention to Chinese traditional festivals instead of Western traditions."

Then there was this anti-Christmas demonstration in Hunan, in central China, urging Chinese citizens not to celebrate foreign festivals.

Now, taking a step back, these bans and protests were a handful of isolated incidents across a nation of more than a billion people. So there certainly wasn't a nationwide ban on Christmas. But Communist China isn't known for kindness toward Christians or their holidays.

This report Thursday from The New York Times cites Christian advocates who say officials have cracked down on hundreds of churches, demolishing some of them, in Wenzhou. That's the same city that banned Christmas celebrations in schools.

The group International Christian Concern says this video shows a fight between police and churchgoers as their church is torn down.

Exact counts are difficult, but many estimates put the number of Christians in China at 50 million or more.