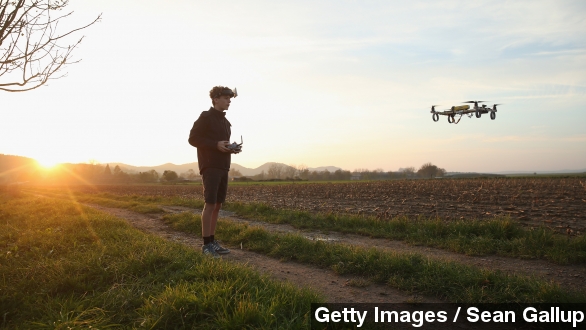 SMS
Christmas Gifted Drones Are Already Causing Problems
By Matt Picht
By Matt Picht
December 25, 2014
Commercial drones were a popular gift this Christmas, but flying one is harder than it looks, and the results can range from comical to catastrophic.
SHOW TRANSCRIPT

This Christmas Day, tens of thousands of people unwrapped a big shiny box under the Christmas tree and found their very own personal drone inside. Oh and yes, the horror stories are piling up.

The Federal Aviation Administration still has a blanket ban on commercial drone use, but hobbyist models have really taken off. From cheap $40 mini-drones to thousand-dollar beasts, drones topped many wish lists this Christmas.

Problem is, those gifts often don't come with flying lessons.

As Slate contributor Seth Stevenson found out last month. "There goes the propeller."

And if social media is any indication, it looks like some people will spend a fair amount of Christmas 2014 fishing drones out of trees.

Now, thankfully there haven't been any reports of serious injury yet. While drones might seem like a fun toy, the vehicles can do a lot of damage if you're not careful.

Former FAA official Scott Brenner told CBS, "It's like giving your 12-year-old the keys to your car and saying, 'Go drive on the Beltway, you'll be fine. I hope everybody else is ok too.'"

CNN reports there have been over two dozens close calls between a drone and a plane since July. Some commercial airline pilots were even forced to alter their course briefly to avoid a collision.

And then there was TGI Friday's plan to fly a mistletoe-bearing drone around a Brooklyn outlet. That drone ended up crashing into a photographer at a press event, cutting her nose and chin with its propellers. Not exactly the kind of kiss meant for mistletoe.

To help minimize the risk, the FAA's launched a safety campaign along with other industry groups to help educate new users on the dos and don'ts of drone flight.

Some pointers from the campaign: keep your drones below 400 feet and within your line of sight; don't fly near airports, stadiums or large crowds of people; don't try to get more than 55 lbs of weight airborne; and don't try to make money off of your drone without an FAA license.

So if you're one of those proud new drone fliers, have fun but take care. For the rest of us, just type some combination of the words "drone," "dad" and "Christmas" into your favorite social media search bar, and enjoy the schadenfreude.

This video includes music by Kevin MacLeod / CC BY 3.0.