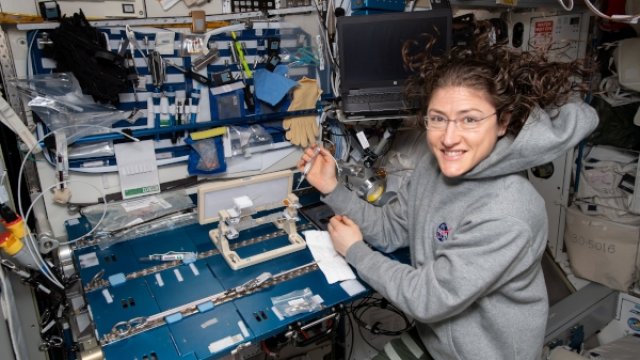 For the first time in nearly a year, Christina Koch said hello to gravity.

Koch completed her record 328-day space mission, landing in a remote area of Kazakhstan on Thursday. It's the longest mission for a female astronaut, smashing the 288-day record set by Peggy Whitson.

Koch was only supposed to be in space for six months. That stay got extended shortly after she arrived at the International Space Station. Her time in space allows researchers to study how a long-term spaceflight affects the female body. NASA said the findings will help the agency as it looks toward future missions to the moon and Mars.

"It's truly a dream come true to know I can continue working on a program I valued so highly my whole life," Koch said last year. "To be able to contribute to that and give my best every day to that for as long as possible is a true honor and a dream come true."

Koch conducted six space walks, including the first all-female space walk with fellow astronaut Jessica Meir. While it is easy to marvel at her records, she also conducted important research.

She helped the Expedition 61 crew with more than 100 experiments. That includes studying how plants grow in space. Koch was able to grow Mizuna mustard greens — and, yes, that included a taste test.

In addition, she studied how fire reacts in space, which can help astronauts use fuel more efficiently. Koch also helped installed a BioFabrication facility. It's essentially a 3D printer that prints organ-like tissues. The experiments will help NASA study human viability outside Earth.

Before returning to Earth, Koch posted this tweet from the International Space Station reflecting on her mission: "What will I miss? The exquisite beauty of both the planet Earth and this marvel that its amazing people created."