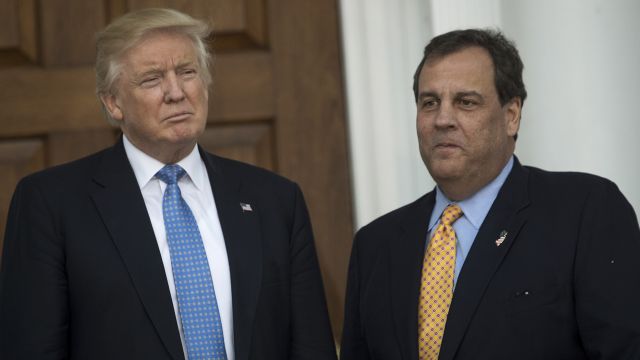 Chris Christie turned down numerous roles in the Trump administration, according to anonymous sources.

A recent report from NJ Advance Media, which cites multiple anonymous sources, claims Christie was offered several Cabinet positions, including secretary of veterans affairs and secretary of homeland security. The report also claims he was offered other, lesser roles — like ambassador to Italy.

Anonymous claims of Christie being offered a role in Donald Trump's Cabinet date back months. In October, sources told the New York Post that Trump offered Christie the role of vice president but then rescinded the offer.

In fact, a lot of information that has come out about Trump's upcoming presidency is from anonymous sources. We don't know who said what, just that they are "close to the candidate" or "have knowledge of Trump's transition efforts."

But Christie, along with former New York City Mayor Rudy Giuliani, was an early Trump loyalist. Many anticipated both would hold high positions under a President-elect Trump.

Giuliani was also considered a top pick for secretary of state until late last week, when he announced he'd pulled his name from consideration.

But, again, anonymous sources told several outlets Trump's closest advisers were skeptical of both Christie and Giuliani, pointing to the George Washington Bridge scandal during Christie's tenure as New Jersey governor and Giuliani's history of paid consulting for foreign governments.

Christie now says he plans to finish out his gubernatorial term, which ends in January 2018.