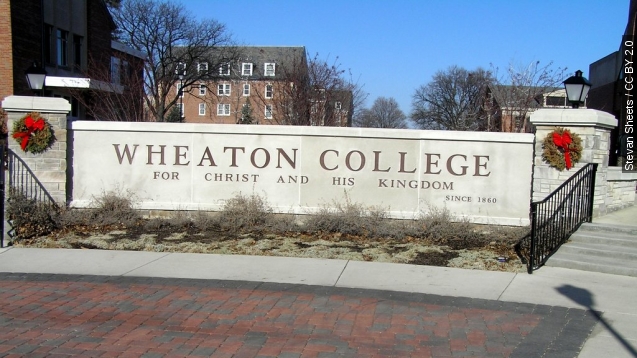 SMS
Christian College Suspends Hijab-Wearing Professor Over Islam Comments
By Samantha Crook
By Samantha Crook
December 16, 2015
A professor at a Christian university was placed on administrative leave after she wore a hijab and said Islam and Christianity worship the same god.
SHOW TRANSCRIPT

A professor at an evangelical liberal arts college in Illinois has been placed on administrative leave after wearing a hijab and saying Christians and Muslims "worship the same God."

Wheaton College professor Larycia Hawkins announced last week on Facebook she would stand in solidarity with her "Muslim neighbor" by wearing a hijab as part of her advent worship. (Video via Wheaton College)

In an interview with the Chicago Tribune, Hawkins cited "vitriolic" language about Muslims as part of the reason for her decision.

Student leaders at the college publicly spoke out against a different Christian university's president who commented on the San Bernardino shooting earlier this month. (Video via Liberty University)

"If more people had conceal carry permits, then we could end those Muslims before they go out there and kill them," president of Liberty University Jerry Falwell Jr. said.

In her Facebook post, she invited all women to join in solidarity with Muslim women "for whatever reason."

But her comment about the two religions worshipping the same god may have violated the college's statement of faith.

In a statement, the college said: "While Islam and Christianity are both monotheistic, we believe there are fundamental differences between the two faiths, including what they teach about God's revelation to humanity, the nature of God, the path to salvation, and the life of prayer."

This video includes images from Stevan Sheets / CC BY 2.0 and sittiealiah M A / CC BY 2.0.