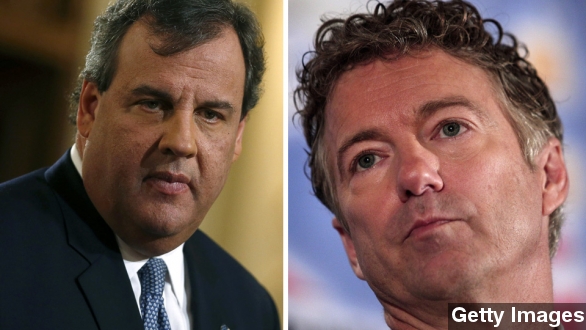 Two potential Republican presidential candidates are facing criticism for their stance on vaccines amid the current measles outbreak that has spread throughout the country.

Sen. Rand Paul said in multiple interviews Monday he's not against vaccines but thinks they should be optional. Paul, who's a former ophthalmologist, also linked some vaccine cases to mental disorders. (Video via CBS)

"I've heard of many tragic cases of walking talking normal children who wound up with profound mental disorders after vaccines. ... I think the parent should have some input. The state doesn't own your children," Senator Rand Paul said.

Meanwhile, New Jersey Governor Chris Christie told reporters, "Parents need to have some measure of choice in things as well so that's the balance that the government has to decide."

Though, according to The Washington Post, Christie later clarified and said, "There is no question kids should be vaccinated."

Not surprisingly, both prominent Republicans received plenty of backlash from the media for their remarks, as vaccination is a huge public health concern.

This all comes just after President Obama voiced support for vaccinations in a TODAY show interview with NBC's Savannah Guthrie.

"Are you telling parents you should get your kids vaccinated?" TODAY show host Savannah Guthrie said.

"You should get your kids vaccinated. It's good for them," Obama said.

Despite the political debates, the vast majority of the scientific community says vaccines are crucial to fighting the current measles outbreak.

In fact, a recent poll by PR Newswire says 92 percent of doctors believe the outbreak is "directly attributable" to parents who don't get their kids vaccinated.

Currently, there've been more than 100 cases of the measles spotted in 14 different states. And health officials say the problem could get worse if vaccinations are neglected.

"When you vaccinate your child, you provide protection to your child but also the vulnerable in the community that can't be vaccinated: little babies, people with cancer. They rely on that protection. ... We're going to see this outbreak continue to spread if people don't vaccinate," ABC Chief Medical Correspondent Dr. Richard Besser said.