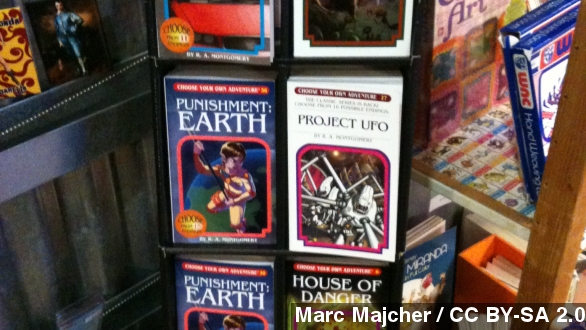 The founder of the popular "Choose Your Own Adventure" children's books series has died. R.A. Montgomery was 78.

The books' publishing company announced Montgomery's death Thursday night, but did not specify a cause.

The editor held various positions after graduating from Williams College in 1958. He encouraged teachers to use the Wall Street Journal in their curriculum, and later became Assistant Dean of Faculty at Columbia University.

In a 2010 interview posted to YouTube by user Matt Barton, Montgomery described the teaching method behind the "Choose Your Own Adventure" books was rooted in his experience of starting a summer school for struggling students.

"Gradually over the course of the summer we got them into doing algebra, you know, we broke down the resistance by getting them involved in the process."

According to a release on Choose Your Own Adventure's website, Montgomery worked in places as far as West and North Africa. That's where he used role-playing exercises to train Peace Corps Volunteers. He later settled with his family in Vermont, founding Vermont Crossroads Press in 1975.

It was there he was approached by an author named Ed Packard seeking to publish his interactive children's book called "Sugarcane Island."

That marked the beginning of the "Choose Your Own Adventure" series that would go on to sell more than 250 million copies in 38 languages, gaining fans all over the world.

When asked why he started writing the"Choose Your Own Adventure" Books, Montgomery told the nonprofit Reading Is Fundamental, "My sons were younger then and I wanted to find a way to make reading more interactive for them."

A private memorial for Montgomery is planned for the spring.