Chipotle To Take GMO Ingredients Off The Menu 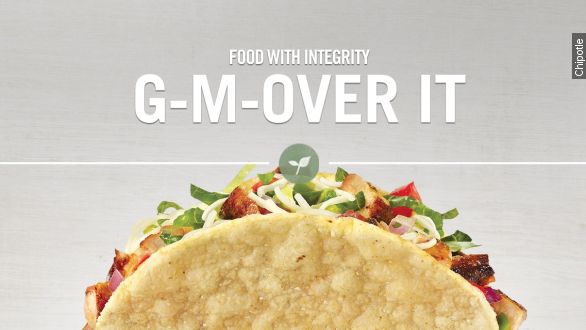 SMS
Chipotle To Take GMO Ingredients Off The Menu
By Jamal Andress
By Jamal Andress
April 27, 2015
The danger of GMOs is debatable, and Chipotle admits that on its site. However, the company lists other reasons for removing GMOs from the menu.
SHOW TRANSCRIPT

Chipotle is once again changing up its menu. On Monday, the restaurant announced it will only make burritos with non-genetically modified ingredients.

Genetically modified organisms, or GMOs, are things like corn, zucchini and soybeans and other plants that have been genetically altered so the crop is more helpful to farmers. For example, a GMO may produce its own pesticide or not need as much water to survive.

Critics of GMOs say the modified crops can cause 'super-weeds' that are resistant to pesticides and new allergic reactions because of added proteins that don't exist in unaltered plants.

The danger of GMOs is still up for debate, and Chipotle admits as much on its site. The company lists other reasons for removing genetically modified ingredients from its restaurants — namely GMOs' potentially negative environmental effects and satisfying customers who are against the practice.

The fact Chipotle wants to get rid of GMOs before any other big chain isn't surprising given the company's history. It was the first national food chain to publicly list which of its products contained GMOs.

"Its all part of a program called Food with Integrity, that seems better to Steve."

"Food with Integrity" — it's a motto Chipotle seems to be sticking with, for better or for worse. Chipotle says about a third of its locations have not served their popular carnitas during most of 2015 because of a pork shortage.

"This is the type of farm Chipotle expects its pigs to be raised on," according to a WCPO report. (Video via WCPO)

The reason for the pork shortage is one pork supplier did not meet Chipotle's so-called "responsibly raised" standards. These standards require more space and cleaner food for the pigs, albeit higher expenses for the farmer.

This change in the menu was a large part of the company's slower-than-usual sales growth this past quarter.

A Chipotle spokesman told Quartz, "We had hoped the shortage would encourage our carnitas customers to try another menu option, and some did, but many have decided to hold out until carnitas returns to their market."

Customers as well as investors seem to be happy with the move to drop GMOs. Chipotle's stock price rose Monday morning after the announcement.

This video includes images from Getty Images and music by Risey / CC by NC 3.0.