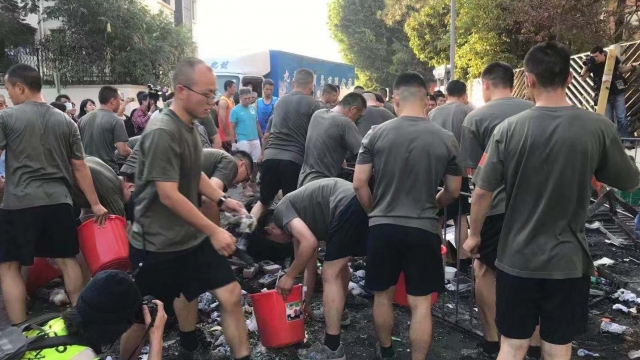 SMS
Chinese Troops Clean Streets After Protesters Disperse In Hong Kong
By LeeAnne Lowry
By LeeAnne Lowry
November 16, 2019
Troops have been allowed to do community service without the government's permission since last year.
SHOW TRANSCRIPT

It isn't typical for Chinese troops to leave their barracks in Hong Kong. China's stationed soldiers there since 1997, but they're only supposed to deploy if the city requests it. That's never happened.

A Hong Kong government spokesperson clarified that the cleanup was self-initiated and voluntary for the soldiers. Troops have been allowed to do community service without the government's permission since last year when a major typhoon hit the city.

About 1,000 protesters had set up heavily fortified camps at college campuses across the territory. Several major universities have shortened semesters or held classes online.

Most of the demonstrators have left the campuses. On Friday, the presidents of nine universities said in a joint statement, "No political viewpoint gives a license to damage property, employ physical threats, or use violence against individuals."