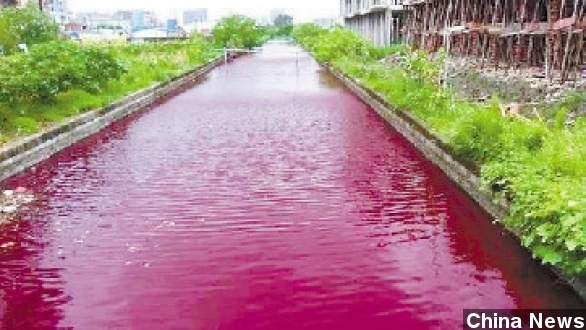 By Jasmine Bailey
July 26, 2014
The Wenzhou river in eastern China turn a bloody red color earlier this week. Researchers are still investigating a cause.
SHOW TRANSCRIPT

Residents in eastern China woke up earlier this week to find the river that runs through their city had turned blood red.

"The other night folks smelled something strange. Then the Wenzhou river turned red, blood red, and nobody knows why." (Via CBS)

While officials aren't exactly sure what caused the discoloration, it's likely not the beginning of a biblical plague — or even actually real blood. Media in the United States seem just as confused about the incident.  (Via Paramount Pictures /  "The Ten Commandments")

"Environmentalists suspect that it may be from someone illegally dumping coloring into the waterway." (via ABC)

"But the river banks are covered with garbage. For now inspectors are taking water samples for closer analysis." (Via Fox News)

Chinese outlets report a paper company, clothing-maker and food coloring manufacturer all lie along the river and could have something to do with the incident.

​China News quotes the city's chief of the environmental protection bureau, who said, "We suspect that somebody dumped artificial coloring in the water because he thought the typhoon yesterday would cause heavy rain, and nobody would notice [the color] ... It turned out there wasn’t heavy rainfall yesterday, so the evidence is left behind."

According to the Daily Mirror authorities claimed that incident was the result of sand distribution from upstream flooding.

And mysterious pollution in China has made headlines for years.

Last year ​more than 2,800 dead pigs were found floating in the Huangpu River — the main drinking water supply for Shanghai and its 20 million inhabitants. (Via Getty Images)