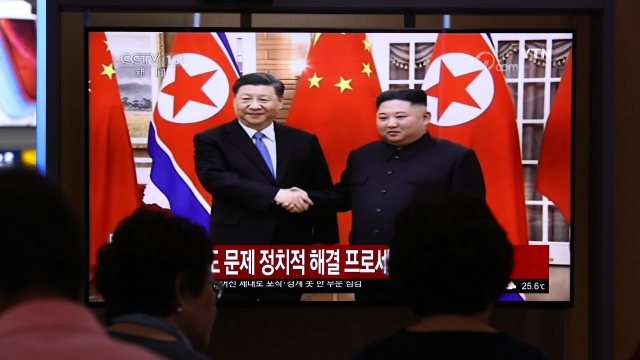 Chinese President Xi Jinping's historic two-day state visit to North Korea has ended ... and we don't know much about it.

It was the first trip by a Chinese leader to North Korea in 14 years. The meeting was largely a symbolic show of the countries' united front before the G-20 summit next week.

North Korean leader Kim Jong-un rolled out the red carpet for Xi's arrival in Pyongyang on Thursday. Hundreds of thousands of people lined the streets to wave flags as the the two leaders drove by.

Xi and Kim attended a banquet and then a gymnastics performance, titled "Undefeated Socialism," where Kim was quoted by North Korean news outlets as saying: "Socialism is the core of the DPRK-China friendship. … We must secure and develop socialism together."

On Friday, the two leaders sat down to talk. Their discussion is arguably the most important part of the trip, but so far, both countries have been vague about what was said.

Some key takeaways: Xi reiterated his commitment to mediating talks between North Korea and the U.S. Kim has previously said he'll reopen negotiations with President Donald Trump when the U.S. pulls back on sanctions, something President Trump has refused to do unless North Korea fully denuclearizes.

North Korean state media outlet KCNA reported that Kim and Xi also "broadly exchanged their opinions on the political situation of the Korean Peninsula and other serious international and regional issues."

While details about what was said are still scarce, analysts say the discussion may play a role in Xi's meeting with President Trump in Japan next week.