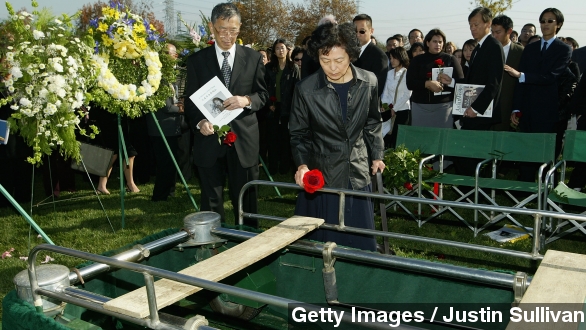 Two southern Chinese officials are under investigation — accused of buying stolen corpses in an effort to meet cremation quotas.

This comes after the officials, both from Guangdong province, were named by a grave robber who police arrested after a man realized his grandfather's body was missing.

The grave robber admitted to stealing more than 20 bodies, putting them in bags and carrying them to Guangdong province on a motorcycle. He then reportedly sold each corpse for about $500.

According to local outlets, the two officials in question, both from different cities, were arrested. Both suspects are in charge of funeral management reform, which enforces a controversial cremation quota for each city based on population.

The quota is part of an effort to preserve land in the already highly populated country. However, the push has been difficult to enforce.

As Chinese outlet Xinhua explains: "China has a long tradition of ancestor worship, which usually requires families bury their relatives and construct a tomb. ... Reacting to the news of the quota, people in the area began burying the corpses of their relatives in secrecy."

The push for cremation in the country has been encouraged since the 1950s, according to China Daily.

The outlet reports nationally, the cremation rate was at about 50 percent in 2012. In larger cities, it's closer to 100 percent with more rural parts of China resisting the practice.

Although there's been no report of what consequences the officials would face if the quotas weren't met, earlier this year the government issued a burial ban.

By tradition, the elderly in China have their coffins built before their deaths and keep them inside the home until needed. The Independent reports days before the ban was implemented, officials in one province went around destroying coffins in an effort to force cremation.

The officials recently arrested were reportedly under intense pressure from the Chinese government to meet the quotas.

BBC talked to an analyst who explained most of the backlash from the public doesn't come from encouraging cremation but enforcing quotas.

"It just shows maybe the initiative is very progressive. ... But the target setting is very silly. ... Some even blame the officials for being stupid. Some even ask, 'If you don't have enough dead bodies, are you going to kill?'"

One of the suspects reportedly confessed to buying 10 bodies. The investigation is still ongoing.