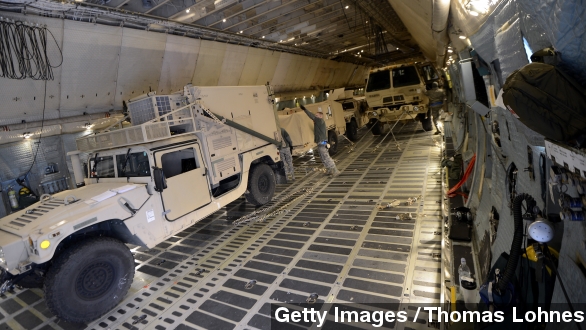 By Cliff Judy
September 18, 2014
The U.S. once again accused the Chinese military of hacking government secrets. If history is any indicator, China will point right back at the U.S.
SHOW TRANSCRIPT

A newly released report from the U.S. Senate Armed Services Committee shows China successfully hacked military contractors at least 20 times in one year, and the military rarely found out.

The committee released this 52-page report Wednesday noting from June 2012 to May 2013, there were approximately 50 intrusions detected with at least 20 of them successful — all traced to China.

"Of those ... intrusions, TRANSCOM was made aware of only two, a troubling finding given the potential impact of cyber intrusions on defense information and operations."

TRANSCOM as in U.S. Transportation Command — the massive operation to ship U.S. military equipment, vehicles and personnel all over the world.

As the Senate committee's chair Carl Levin put it, “These peacetime intrusions into the networks of key defense contractors are more evidence of China’s aggressive actions in cyberspace.”

Voice of America talked to a fellow at the nonpartisan think tank East-West Institute who called government-sponsored cyber theft "a low-level act of war."

But can the U.S. really be all that indignant over cyberspying or theft of government secrets? China's repeated response to similar accusations has gone something like this.

FATHER: "Who taught you how to do this stuff?"

SON: "You, alright? I learned it by watching you!" (Video via Partnership For A Drug-Free America)

But the Chinese have pointed directly to Edward Snowden's leaks of NSA's cyber surveillance programs on foreign countries whenever these accusations fly, saying the U.S. is hypocritical. (Video via The Guardian)

In responding to the Senate committee's report, the China Foreign Ministry spokesman said Thursday the claims were "groundless."

But perhaps just as disturbing from a U.S. point of view, the contractors' lack of communication — and in some cases, lack of knowledge — of the hacks.

TRANSCOM began requiring its 80 contractors to report any cyber incidents in 2010, but as of a year ago, it had only received two reports.

Senator Levin and his committee recommended tighter restrictions in reporting hacks and will also require the Department of Defense to help contractors detect and stop them.

Past hacks have led to the U.S. Justice Department filing largely symbolic criminal charges against Chinese officials in May for stealing trade secrets. In June, Canadian authorities arrested a Chinese businessman at the U.S.'s request because prosecutors say he broke into a Boeing network and stole documents on the F-22 Raptor and other military jets. (Video via Bloomberg & Lockheed Martin)