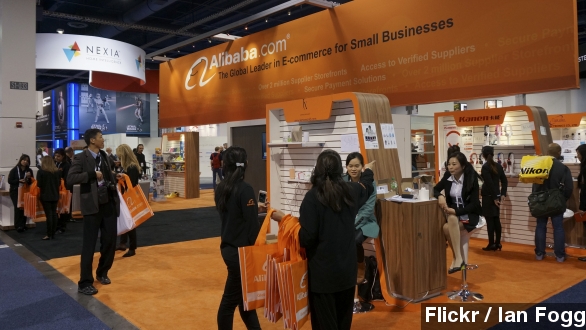 One of the world's biggest e-commerce companies is set to open its first ever American venture, and it's thinking small.

Alibaba Group is a Chinese Internet retailer that handled $170 billion in sales last year. For perspective, that's more than Amazon and eBay combined. (Via The Economist)

But Alibaba's newest project, an online marketplace called 11 Main, is focusing on small businesses, and it's invite only.

The Financial Times reports that 11 Main "will operate like Alibaba's China-based TMall, which offers virtual store fronts to merchants who set their own prices and manage every aspect of their sales apart from payment."

The timing of the move is interesting because it comes less than a month after Alibaba filed for what's expected to be the biggest initial public offering the tech sector has ever seen.

"This is going to be the biggest IPO ever. It's run by really good investment bankers: JP Morgan, Goldman Sachs, Morgan Stanley, top guys here." (Via Fox Business)

But most people in the U.S. who aren't in the business world have probably never heard of Alibaba, and there's a reason for that.

TechCrunch argues that Alibaba isn't interested in expanding internationally too much because of its overwhelming domestic success and the way the company is structured.

"Alibaba's DNA was crafted for the Chinese consumer, and it will face the same problems any company experiences when it leaves its local cocoon."

It's still unclear when exactly Alibaba plans to open 11 Main's virtual doors, but the company's IPO is expected to come in early August.