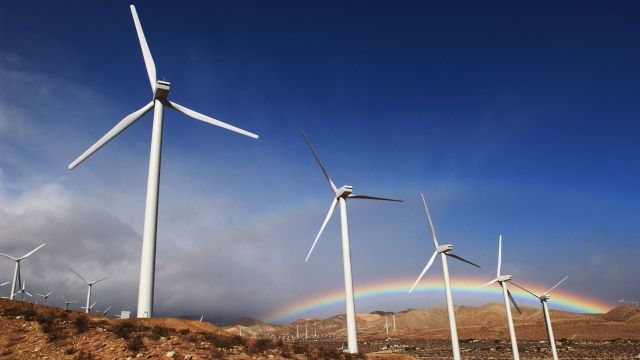 SMS
Some Coal Miners In Wyoming Might Soon Be Farming Wind Instead
By Ethan Weston
By Ethan Weston
May 28, 2017
Free training from a Chinese company could put some of Wyoming's out-of-work coal miners to work on wind farms.
SHOW TRANSCRIPT

A Chinese energy company wants to be the wind under Wyoming's coal miners wings.

Goldwind Americas has a plan to put unemployed coal workers in the state back to work. But instead of mining coal, they'd be farming wind.

At a recent energy conference, the company said it wants to provide free training programs for the state's out-of-work miners. Goldwind also hopes to supply the state with up to 850 turbines.

It might be a hard sell at first, Wyoming isn't exactly wind energy friendly. It's the only state in the nation with a tax on wind energy production.

But it might be necessary. While Wyoming produces the most coal in America, massive layoffs have put a lot of miners out of work.

The company's CEO says most of the workers already have the necessary skills. And the Bureau of Labor Statistics reports people don't need advanced degrees to work on turbines.

And the future looks pretty bright for wind turbine technicians. Jobs in that field are expected to grow 108 percent between 2014 and 2024.

But there's some reason to be skeptical of retraining programs. A study from The Hamilton Project found the programs work best for younger people and those able to relocate, which isn't your average coal worker.

This program keeps Wyoming workers in Wyoming, so it could be more successful.

And if this type of program works out, it could help other communities around the country. Coal jobs have been on the decline all over the U.S. for years.

One study from last year suggests the entire coal workforce could be retrained to work in solar energy for between $180 million to $1.8 billion.