Chinese Airliner Crashes With 132 People Aboard 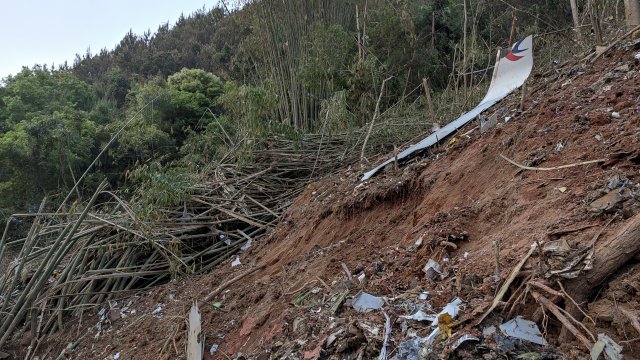 Footage broadcast on Chinese state TV shows emergency workers hiking through thick jungle to reach the site where a China Eastern Airlines 737 crashed into a steep mountainside. 132 people were on board and there are no reports of survivors.

There is no known cause of the crash yet, but accident investigator and author Christine Negroni says officials will be looking at a number of possibilities.

"There's really three things that could have happened," Negroni says. "A bomb, missile, or an in-flight breakup of the aircraft."

Data from flightradar24 shows the plane was at about 29,000 feet when it began to drop suddenly, as much as 31,000 feet per minute. Footage reportedly captured by a local mining company shows the plane dropping straight down.

"There's no way that this is initiated by a pilot," Negroni says. "The plane won't go that fast under control. It's an out of control airplane."

The airplane that went down Monday is not the Boeing 737 MAX, the model that was temporarily grounded after crashes in 2018 and 2019 that killed 346 people and tarnished Boeing’s reputation. The plane that crashed in china was seven years old.

In a statement, Boeing said "our thoughts are with the passengers and crew of China Eastern Airlines flight MU 5735. We are working with our airline customer and are ready to support them."

both the NTSB and FAA say they are monitoring the crash and stand ready to assist if they are asked.