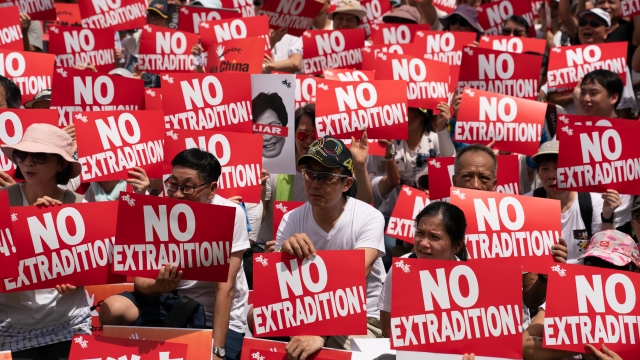 SMS
China 'Will Not Allow' G-20 Summit To Discuss Hong Kong Protests
By Katherine Biek
By Katherine Biek
June 24, 2019
A Chinese official told reporters Monday that the Hong Kong protests are a domestic issue and that "No foreign country has a right to interfere."
SHOW TRANSCRIPT

China's not going to allow the recent protests in Hong Kong to be brought up at the G-20 summit in Osaka, Japan, later this week.

That's according to a top official at China's Foreign Ministry. He told reporters Monday that the protests are a domestic issue and that "No foreign country has a right to interfere."

People in Hong Kong have been protesting against proposed extradition legislation that would allow China to extradite suspects from Hong Kong.

The demonstrators inched toward their goal when Hong Kong's leader Carrie Lam put the controversial bill on hold. But she's resisted demands to fully withdraw the legislation and step down.

Despite China's refusal to discuss the protests with international leaders, the Associated Press reported that one Hong Kong protest group is planning another large demonstration for Wednesday in the hopes that other countries will take notice.

U.S. Secretary of State Mike Pompeo told Fox News earlier this month that he was sure President Donald Trump would bring up the protests to his Chinese counterpart when they meet along the G-20 summit's sidelines.

President Trump previously weighed in on the unrest in Hong Kong, saying he thought the protesters were "having a big impact" and that they'd been "very effective in their dealings with China."

The G-20 summit is scheduled for June 28-29. Leaders from the EU and 19 countries are expected to attend.