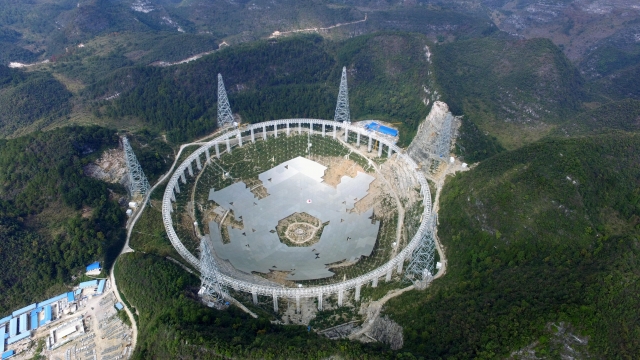 SMS
China Uproots Thousands Of People For Alien-Hunting Telescope
By Katie Link
By Katie Link
February 16, 2016
More than 9,000 Chinese residents are being forced to relocate before the country completes a massive alien-searching radio telescope.
SHOW TRANSCRIPT

China is really serious about its search for aliens. So serious that it’s forcing thousands of people out of their homes in order to build a giant radio telescope.

It’s called FAST, and it’s going up in the southwestern province of Guizhou. Construction started back in 2011, and experts say the telescope could help researchers finally discover extraterrestrial life when completed next fall.

Or it might not find anything. Either way, 9,110 residents are being relocated to "create a sound electromagnetic wave environment." Which may be the most unique reason yet for a forced relocation by the Chinese government.

In years past, the Communist Party has moved people out of their homes to make way for new dams and infrastructure in the name of helping the environment or boosting the economy.

Take the 2008 Beijing Summer Olympics, for example. The government reportedly moved 2 million citizens out of their homes to make space to host the games. The Chinese foreign ministry claimed only 6,000 domiciles were destroyed.

The construction of the Three Gorges Dam is another project that uprooted residents. More than 1.2 million people were forced out of their homes because of that project.

In the past, international rights groups have tried to stand up for these people, arguing relocated residents often don’t get enough warning or compensation.

In the case of the giant alien-searching telescope, residents will be paid 12,000 yuan, or about $1,800 U.S., for their troubles. And maybe, just maybe, they'll be able to say they once lived in the place that first discovered aliens.