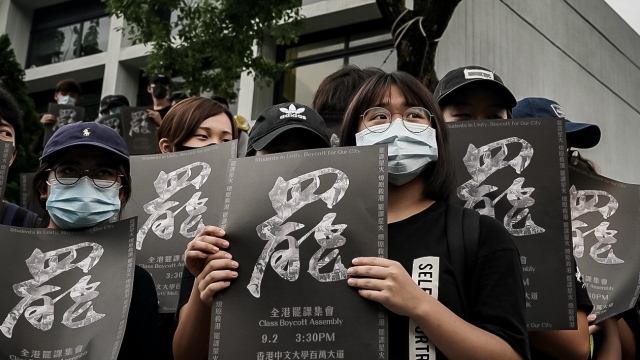 ​Officials say if Hong Kong's government asks Beijing to step in, China can legally declare a state of emergency.

China says it has the power to declare a state of emergency to deal with the anti-government protests in Hong Kong if the unrest continues.

Officials from the Hong Kong and Macau Affairs Office said Tuesday that "although there have been some positive changes in the situation [in Hong Kong], the most important and urgent task ... is to 'stop the storm and restore order.'" Officials also said that if Hong Kong's government asks China's central government to help it control the protests, Beijing could legally declare a state of emergency to send troops to the region. They also raised the idea of outlawing the masks worn by protesters and said teachers who encouraged students to protest should be punished.

Protests in Hong Kong have been going on for months now and have occasionally turned violent. Tens of thousands of protesters clashed with police during Saturday's demonstrations, with some lobbing Molotov cocktails at government headquarters and setting fires in the streets, while police fired tear gas and water cannons at protesters.