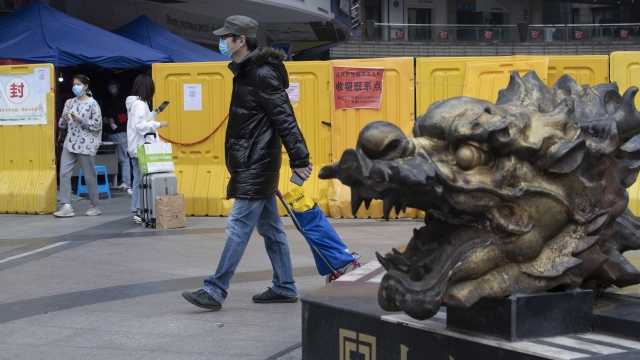 SMS
China Paints A Rosy Picture, But Tens Of Millions Could Be Unemployed
By Peter Hecht
By Peter Hecht
May 13, 2020
China's government says the jobless rate has worsened to 6%. Global observers say that isn't close to the actual unemployment number.
SHOW TRANSCRIPT

Tens of millions of people in China are believed to be out of work. International economic observers say unemployment in the communist country could be as high as 20%, particularly as areas are shut down amid new coronavirus concerns.

But that is not the image being broadcast by the Chinese government and state media. They depict an economy churning through difficult times — with unemployment up but closer to 6%.

The economic news being touted in China this week involved the reopening of Shanghai Disneyland, with large crowds respecting social distancing mandates.

China says it's suppressing the coronavirus with vigilance and testing. Places like Wuhan, where the global outbreak began, have significantly reopened but are now getting new COVID-19 cases.

A Chinese investment banking company, Zhongtai Securities, estimates China's actual April jobless rate at 20.5%, with 70 million out of work. And a chief economist for the Wall Street hedge fund Upright Capital said as many as 200 million Chinese may be unemployed or underemployed.

Willy Lam, of the Center for China Studies at the Chinese University of Hong Kong, says just the fact that China acknowledged 6% unemployment is remarkable. He said: bbb

Yet China's unemployment benefit agency says only 2.3 million people applied for financial assistance in the first quarter of 2020. They'll be eligible for payments of about $190 a month.