China's Richest Man Has A Message For President-Elect Trump 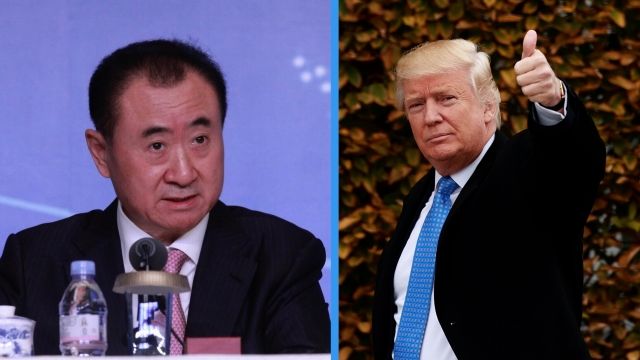 President-elect Donald Trump has had a lot to say about China.

"They haven't played by the rules. And I know it's time they're going to start," Trump said in Iowa last week.

And recently, some members of Congress have called for a review of policies regarding Chinese investments in the United States.

It seems China's richest man has been listening — and he has a warning for the president-elect.

Wang Jianlin is the chairman of the Dalian Wanda Group, which owns the largest theater chain in the United States. In the fall, a U.S. congressman called on the Justice Department to review the group's recent U.S. acquisitions.

The Wanda Group recently acquired Carmike Cinemas, merging Carmike with its other holding in AMC Theaters to create the largest theater chain in the U.S. It has also inked a deal to buy Dick Clark Productions, LLC. It already owns movie studio Legendary Entertainment.

Wang said he had recently told the president of the Motion Picture Association of America "to tell Mr. Trump that I have $10 billion of investments in the United States and more than 20,000 employees there who wouldn't have anything to eat should things be handled poorly."

Wang made the comments during a Q&A at an entrepreneur conference in Beijing on Saturday.

SEE MORE: Trump's Pick For Ambassador To China Already Has A Head Start

Wang went on to say, "At least in the film and television industry, you must understand that the growth of English films depends on the Chinese market."

Trump's comments about China during the campaign and even after the election have largely been focused on trade and not Chinese investments in the U.S.

Wang appears to have noticed. He said, "... we still need to wait and see Mr. Trump's attitude towards Chinese cultural enterprises after he takes office."