China's On Track To Beat Emissions Goal — Because It Has To 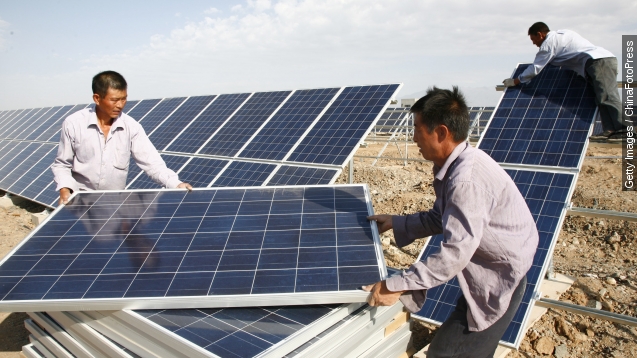 One of the big topics for this week's G7 summit in Germany is climate change, but it's a country not on the G7 that could have the biggest impact on that issue: China. (Video via Italian Government)

China's the largest emitter of carbon dioxide in the world and, as such, has commitments when it comes to cutting greenhouse gases — commitments it might be on course to meeting. (Video via Arirang)

That's according to research from the London School of Economics, which says the country is set to level off emissions by 2025, if not earlier — five years ahead of its current goal of 2030.

China committed to that goal in a joint deal with the U.S., which — at the time — critics alleged, "requires the Chinese to do nothing, at all for 16 years, while these carbon emissions are creating havoc." (Video via CBS, The White House)

But China has more motivation to cut back its emissions than just an agreement, because it stands to bear the brunt of catastrophic climate change.

China's agricultural sector has already seen some effects of warming, with the country's north seeing increasingly severe droughts over the past years. (Video via Climate Reality)

In 2010 alone, polluted air reportedly lead to the premature deaths of more than 1.2 million people in China, as much as 13 percent of GDP in costs. (Video via VICE)

"At the same time, they've got exposure to the climate change problem, and they're worried about their energy security issues. So they've been looking to diversify their energy sources ... that means getting off the fossil fuels," Princeton University professor Michael Oppenheimer told PBS.

It's a priority China seems to realize, as its officials have spoken to that effect, and it's invested heavily in renewable energy. (Video via CCTV)

Six of the top 10 manufacturers of solar panels are based in China, and the country leads the world in solar panel installations as well. (Video via DuPont)

That's just one part of what the London School of Economics' report called China's turn away from the unsustainable growth of the past three decades: (Video via The New York Times)

"China’s 'new normal' will need to foster a dynamic process of structural transformation, in which sustainable growth, energy security, a clean environment and a steep decline in emissions all reinforce one another."

But how exactly China aims to implement that growth pattern won't be known for sure until it reveals its next five-year plan, set to start in 2016.