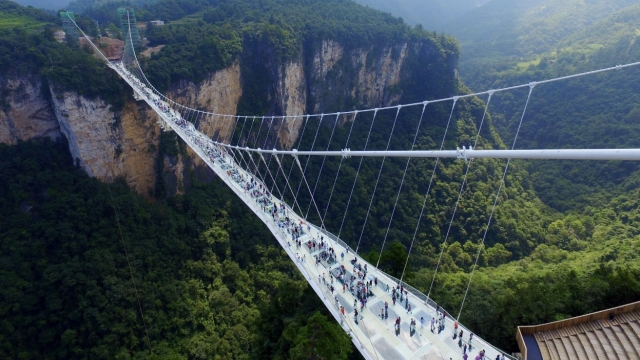 A new bridge in China is taking residents and tourists to terrifying new heights.

The glass-bottom bridge, which is more than 1,400 feet long and rises almost 1,000 feet above the ground in some sections, is located in a part of the Hunan province that provided inspiration for the 2009 film "Avatar."

The Zhangjiajie National Forest Park is the country's first authorized national forest park. It's located in the Wulinguyan Scenic and Historic Interest Area, which is a UNESCO World Heritage site.

Not only is this $3.4 million bridge the longest glass-bottom one in the world — it's also the highest.

But with anything made of glass, there's always the fear it might break. Chinese officials were forced to shut down a different glass walkway in 2015 when one of its glass panes cracked.

Similarly, part of the glass floor of Chicago's Willis Tower's Skydeck, which is 103 stories off the ground, cracked in 2014.

So to help alleviate any fears people might have about the new glass bridge, officials invited journalists, like BBC's Dan Simmons, to pick up a sledgehammer and try to crack the glass.

"And do you know what? I think this might be safe," Simmons said.

Only 8,000 people are allowed on the bridge daily. Officials plan to add bungee jumping to the bridge, as well as use it as a catwalk for fashion shows.