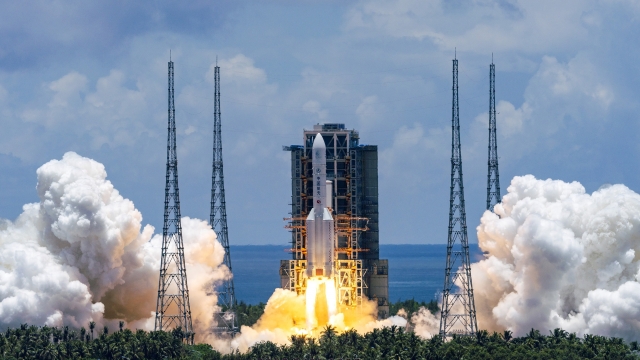 With a piercing launch signal and a vast audience watching on Chinese government television, China jumped into the new generation space race on Thursday.

This launch of a rocket, nicknamed "Quest for Heavenly Truth," began China's first mission to Mars. And it invigorated a competition between rival global powers chasing the newest space frontier.

China's Tianwen-1 rocket is to orbit Mars before landing a rover craft on the surface of the famed red planet. It will then transmit back information on the Martian geography, geology and atmosphere in a search for historic signs of water and ancient life.

The Chinese mission comes just one week before NASA is to launch its Mars Perseverance Rover spacecraft in a similar quest on July 30.

The U.S. is the only country to have launched an unmanned surface probe onto Mars and the Perseverance launch will mark its seventh mission.

But the competition is now intensifying, with the U.S. and China in a piqued global rivalry over economic reach, geopolitics, science and technology.

President Donald Trump, here holding court in May at the private SpaceX launch that sent two NASA astronauts into Earth orbit, has repeatedly called Mars the new frontier. He says he wants to top the moon landing someday with a manned mission to Mars.

With China suggesting similar ambitions, NASA is now summoning the history of the U.S.-Soviet space race. And its hyping its next Mars Perseverance mission with some famous words.

"We are willing to do the hard things, to overcome the many challenges. This is what brings out the best in us."

"We are go for a mission to the moon."

But unlike that former space race, this one has more competitors. On Sunday, the United Arab Emirates launched its own space probe to Mars, taking off from Japan. The country's space minister says it it undertook the mission "because epic challenges...inspire us."