US Car Companies Are Already Shielded From China's Auto Tariffs 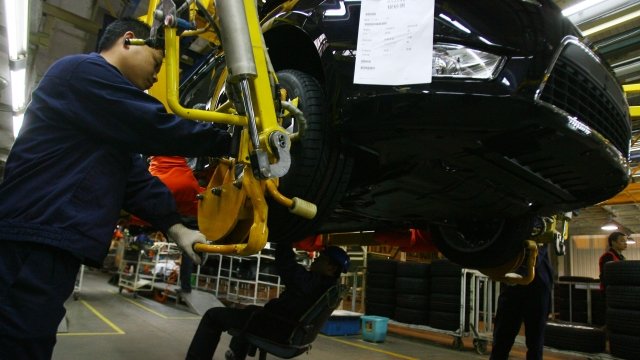 If the president's Twitter feed is to be believed, China is prepared to back off of the massive retaliatory tariffs it leveled on imports of U.S. cars. That'd be a win for the U.S., but not a major one: most big U.S. car companies aren't taking a severe hit from China's car tariffs.

The U.S. sent about $10.5 billion worth of cars to China last year. It's a sizable chunk of the U.S.-China trade relationship, but it makes up less than 1 percent of China's massive car market.

That's not to say U.S. companies aren't doing big business in China; they're just not importing whole cars to do it. Last year Ford sold nearly 1.2 million cars in China — just under 19,000 of those were imports.

Instead, big car companies like Ford and General Motors have built factories in China to produce their vehicles directly in the country. They're required to partner with local companies in order to set up shop, but the lucrative market often makes the trade-off worth it. General Motors sold 9.6 million vehicles last year; more than 4 million of those sales came from China.

China's tariffs only really pack a punch for companies that haven't shifted production. California-based Tesla Motors had to raise its prices in China after the country leveled a 40 percent tariff on vehicle imports over the summer.

Before Trump's tweet, U.S. Trade Representative Robert Lighthizer threatened to match China's 40 percent tariff with an equivalent U.S. tax. That would have been mostly symbolic: China doesn't export nearly as many cars to the U.S. as it imports.

Lighthizer is now spearheading U.S. negotiations with China to strike a more lasting trade deal. The two sides have agreed to a 90-day pause on new tariffs while negotiators try to sort out the various issues between the two countries.