China's Air Quality Is Still Bad, But It's Getting Better 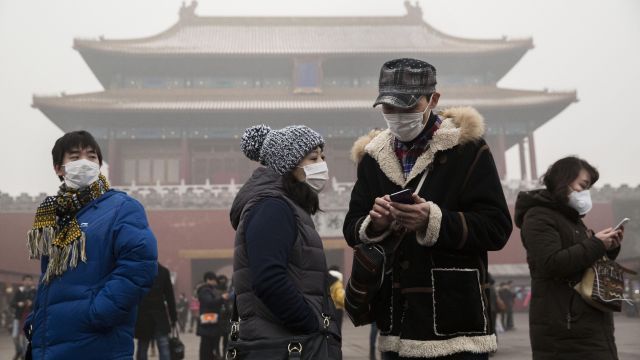 SMS
China's Air Quality Is Still Bad, But It's Getting Better
By Katie Link
By Katie Link
January 20, 2016
Despite a particularly bad December, pollution levels in China might be improving.
SHOW TRANSCRIPT

It was hard for people in China to breathe easy toward the end of 2015. For the first time ever, "red alerts" were issued across northeast China due to dangerous levels of air pollution.

The alerts basically put daily life on hold. Vehicle use was restricted, school was canceled and people were encouraged to stay inside. (Video via ABC)

And yet despite an especially bad December, it turns out China's pollution problem may be getting better — relatively speaking. (Video via CCTV)

According to a new Greenpeace report, the levels of harmful air particles in areas around Beijing have dropped by 25 percent in the past two years. That's noteworthy because most of the country's coal production happens there.

In surveyed cities across the country, annual average levels of harmful particulate matter in the air dropped by more than 10 percent in 2015.

But despite the improvement, China still has a lot of work to do before it can match the World Health Organization's air quality standards.

A Greenpeace campaigner told NBC: "None of these 366 cities meet the World Health Organization's air quality standard. That is to say, 100 percent of Chinese cities studied fail to meet the WHO's standard."